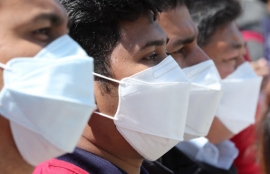 The newly revised rules for the points-based residency visa will go into effect Dec. 1, amid an outcry from expats in South Korea who say the sweeping changes will crush their plans and dreams here.

The Justice Ministry on July 7 put up a public notice -- in Korean -- of the rule adjustments for the F-2-7 visa. The changes are final and the ministry is in the process of “translating it” for non-Korean speakers, a ministry official told The Korea Herald on Thursday.

Designed to attract a “superior pool of foreigners,” the F-2-7 visa allows its holders to stay in the country for as long as five years, with freedom to choose and change jobs and workplaces without being tied to their employers. As of 2018, about 41,000 foreigners were staying here on the visa.

Some of the major changes include a sharp increase in the number of points to be awarded on the basis of income. Currently, 10 points are allocated for those who earn 100 million won or more, but that will change to 60 points. Successful applicants must have a minimum of 80 points.

Also, those holding E-7-4 visas will no longer be eligible to apply for the F-2-7. Those seeking the residency visa must have resided in the country legally and continuously for three years at the time of application.

“This means that unless you are a really superior worker, you have to go back home,” immigration specialist Alex Lee said of the new rule changes.

Here’s a detailed look into the revised points system, which takes into account various factors other than income, such as education level, volunteer activities and Korean language ability.

Although an overall point of 80 guarantees a F-2-7 visa, the duration of stay allowed varies depending on the points. Those earning 80 to 99 points, or those with higher overall points but an income point of fewer than 30 are to receive visa that is valid for less than a year. Those earning between 100 and 129 points, or those in the 80-99 point bracket with income points of 30 to 49 are to get visa valid for up to three years.

Those who earned no income for six months before applying, and those who had been employed in manual labor or the entertainment industry -- which the government considers as “having a negative impact” on the country’s labor market, social and economic order -- could be denied renewal or have their visas revoked.

English language instructors and foreign university graduates with low starting salaries would be among those affected by the rule change, according to the immigration specialist Lee.

“The government dramatically raised the bar to qualify for ‘superior workforce,’ which would make it harder for those earning about 30 million won to get this visa,” he said.

Those who are still relatively young and short of 80 points put in extra efforts such as doing voluntary work here, for example, but even that effort would not be enough to meet the new requirements, he added.

“The visa rules have changed constantly, but not as drastically as this time.”

A 30-year-old Nepalese worker, a holder of the E-7-4 visa granted to skilled foreign workers in the fields of manufacturing, fishing and agriculture, had a dream of opening his own Nepalese restaurant once he gets the F-2-7.

“To get enough points, I have been taking classes at a cyber university in Daegu while working to earn a bachelors’ degree,” he said, adding that he still has two semesters left and has paid some 4.5 million won in tuition fees. He also did voluntary work for 150 hours.

“I did so to live a good, long life here in Korea. I am very angry and perplexed that I am not even eligible for the visa now,” he told The Korea Herald.

Now working at a clothing company in Dongducheon, Gyeonggi Province, he can extend his current visa as long as he stays with the same company. But he might not get it renewed as he loses points as he gets older.

Another E-7-4 visa holder from Pakistan also fear that his plans for the future could be thwarted by the new visa rule changes.

“I have prepared a lot to get this visa. I have passed KIIP Level 5 and did a lot of volunteer work,” said the 28-year-old man who has been living and working at a motor vehicle manufacturing company for eight years in Daegu.

“I want to show my talent and have some freedom to choose a job,” he said. “On this visa, we can’t even change our workplace easily even when we have trouble at work and want to change the job because we fear losing our visa and thrown out of Korea.”

Dan Leonard, 45, who teaches English at a university in Suwon, Gyeonggi Province, has exactly 80 points under the current scheme, with his renewal due in December 2022.

“I am frustrated. I know that this is gonna be more difficult (to get this visa). Options are limited,” he said. “If I want to earn the extra points, I should earn a second masters’ degree or start earning more money.”

He pointed out the COVID-19 outbreak makes efforts to earn more points difficult.

“People either need to spend more time or taking part-time work or classes. If they want people to stay indoors as much as possible, this is a very bad idea.”

“And for those who cannot qualify fast enough, they just have to leave this country. Korea is the safest place to be right now. Are they are trying to shut us out....?” he asked. “They are putting us at risk.”

Jennifer Strout, 35, a private English tutor and a volunteer seeking to establish a nonprofit school for low-income families here, denounced the government’s action as “misleading and unfair.”

“They chose to do it in the middle of the pandemic when everyone is losing their jobs,” she said.

Strout, who had gathered feedback on the government’s plan for the F-2-7 visa rule changes and submitted on behalf of scores of expats here in May, complained that the Justice Ministry had ignored concerns raised by foreign nationals here.

The ministry put up the notice about the upcoming changes on the visa rule on its own site on May 1, asking for feedback from citizens. The notice was not uploaded on the Korea Immigration Service sites, where many expats expect to gain information about their life here and visa rules.

“They don’t care about what we think,” said Strout, who has lived in Korea for eight years.

“Korea is my home. I love the people here. And they are going to take  them away from me just because I am not making enough money.”