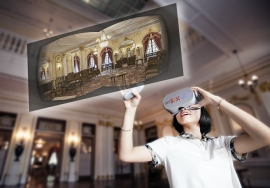 Viewers will be able to enjoy the VR tour through SK Telecom’s Jump VR app with a series of 360-degree VR videos that take visitors on a guided tour of Deoksugung. VR headsets are not required.

“Due to COVID-19, Deoksugung has remained closed for several months. Through Deoksugung VR content, we hope everyone will have an opportunity to virtually tour Deoksugung palace and experience the historical spaces where the emperor strolled long ago,” said Bang Hyun-ki, director of the Deoksugung Palace Management Office.

Deoksugung is one of five extant Joseon royal palaces in Seoul. Designed by British architect John Reginald Harding, the palace’s Seokjojeon is the first Western-style building in Korea and served as the residence of the Korean royal family in the early 20th century before Japanese colonial authorities turned it into an art gallery.

The building was reopened as the Daehan Empire History Museum in 2014 after years of extensive work to restore the building, whose interior was destroyed by the Japanese. Its exterior was damaged by fire during the 1950-53 Korean War.

On Monday, two videos of Seokjojeon were released. Two videos on Daehanmun, Junghwajeon, Hamnyeongjeon, Jeukjodang and Seogeodang, all located within the Deoksugung grounds, are scheduled to be released Friday.

According to the CHA, the VR content includes parts of the palace that are restricted to on-site visitors. For instance, users can take a closer look at the ceiling decoration featuring two dragons in Junghwajeon, as well as the British antique furniture in the emperor’s bedchamber in Seokjojeon.

Deoksugung has had around 470,000 visitors so far this year -- only one-third of last year’s figure for the same period, due to the COVID-19 shutdown. The Seokjojeon and Jungmyeongjeon halls have been closed since February, and the entire palace was shut down May 29.