Culture Ministry to inject W156.9b to support artists amid COVID-19 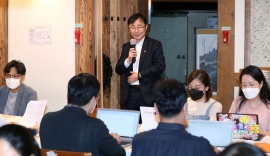 The Ministry of Culture, Sports and Tourism said Wednesday it will inject 156.9 billion won ($131.28 million) to support artists who are suffering financially from the spread of COVID-19.

The amount accounts for around 45 percent of the total 346.9 billion won third extra budget of the ministry.

“Since the overall culture industry has been hit by the COVID-19, we have worked hard for this third extra budget,” Oh Yeong-woo, first vice minister of Culture Ministry, said during a press conference.

“We see that there will not be a fourth extra budget, so we did our best to pass as much budget as we can,” Culture Ministry’s Director General for Arts Policy Kim Young-soo added.

During the conference, the ministry explained that the money will be used for mainly three purposes -- supporting artists directly through subsidies, creating jobs and encouraging audiences to consume cultural contents.

Since there are many demands for subsidies, the Culture Ministry said it will inject an additional 9.9 billion won for this purpose. More than 14,000 artists have applied for the 3-million-won subsidy for artists during the first half of this year.

With this additional amount, a total of 23.2 billion won has been prepared to support 7,725 artists during the second half of this year. Artists can apply for the subsidy from Monday to July 31 at the government’s website (www.kawfartist.net).

The government will also inject 31.9 billion won to support theaters to hire employees.

“We will make sure that artists who are not renowned can get the jobs of installing public artworks,” Oh said.

“We also understand that some of the installed artworks in the past received criticism from citizens as they looked hideous and did not go along with surrounding environment, we will talk with citizens to make sure that this does not happen,” Kim added.

According to the Culture Ministry, around 14.9 billion won will also be used to support artists who would like to perform through online channels.

“Most of the online-related projects are newly established this year due to the coronavirus situation. Education for using online channels is also included,” Culture Ministry’s Director of Arts Policy Division Choi Sung-hee said.