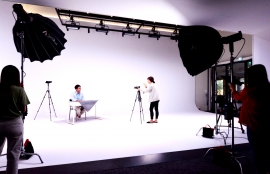 The Korea Herald is set to accelerate its digital drive with the opening of a brand new studio. The newspaper plans to maximize the use of a multipurpose studio to meet demand for multimedia content, including video and podcast productions.

After a month of construction, Herald Corp. held an opening ceremony for its new studio at the company’s building, Herald Square, in Seoul’s central Yongsan district on Wednesday.

“With the completion of a studio that will lead the mobile era, the digital competitiveness of both The Korea Herald and Herald Business will be strengthened,” said Herald Corp. CEO Kwon Chung-won. “We hope to develop original killer content that only Herald can produce, and create the quality content that our readers and viewers want.”

Located on the first floor, the 131-square-meter studio has three independent spaces: studios A, B and C. 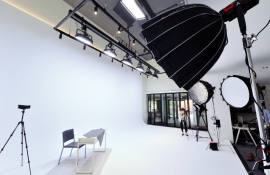 The main A studio has a 5-meter-tall white horizon structure, which with no boundary between the floor and wall allows for the production of photos and video with subjects against a clean white background. Herald Corp.’s white horizon structure is the largest of its kind among South Korean newspaper companies. Up to 10 people can be filmed from one angle at the same time. There is also a broadcasting-level light dimmer console attached to the ceiling. 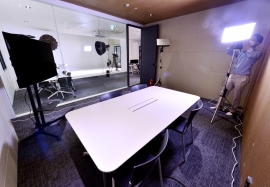 A Korea Herald multimedia staff reporter checks on the light in the B studio at Herald Square. (Park Hyun-koo/The Korea Herald)

The B studio has a custom-made news desk with a Herald Corp. logo, as well as a teleprompter and monitor. The smaller C studio will be mainly used for recording podcasts.

Each studio has soundproofing walls and blackout curtains, allowing for different groups to simultaneously occupy the space. 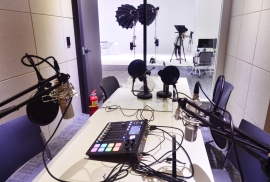 “Our team is more than excited to utilize the studio. We expect to produce more shows that deliver the latest stories and useful information,” said Kim Hae-yeon, a staff reporter on The Korea Herald’s multimedia team. “We hope the studio will be able to shed light on our online video contents that are ready to reach viewers around the world.”

Since launching its official YouTube channel in March 2015, The Korea Herald has uploaded about 500 videos. The videos cover a variety of topics related to Korea, including current affairs, business and the hottest trends.
Herald Corp. pushed for the studio construction as part of the future development plan announced at the beginning of the year. The company looks to continue to build on the infrastructure to go beyond the limitations of legacy media and execute its mobile-first strategy.