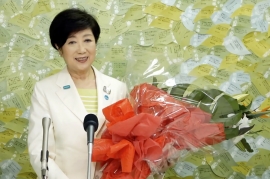 In this image made from YouTube provided by Koike Yuriko Official Channel, Tokyo Gov. Koike recieves a bunch of flower from supporter during her gubernatorial election victory press conference at her election office in Tokyo, Sunday. (AP-Yonhap)

TOKYO (AP) -- Tokyo Gov. Yuriko Koike has won a second term to head the Japanese capital, buoyed to Sunday's election victory by public support for her coronavirus handling despite a recent rise in infections that has raised concerns of a resurgence of the disease.

In her victory speech, Koike pledged to do her utmost to take measures to protect Tokyo residents amid the pandemic.

"The most pressing task is coronavirus measures,'' she said. "Now is a very important time to prepare for a possible second wave, and I will continue to firmly take steps.''

Japanese public broadcaster NHK said its exit polls showed that 74% of respondents supported Koike, with 63% saying they approved of her handling of the coronavirus crisis.

The first woman to head Tokyo, Koike, 67, is viewed as a potential candidate to succeed Prime Minister Shinzo Abe when his term ends in September 2021. For now, she says she's focused on protecting the lives of the 14 million people in Tokyo, a megacity with a $1 trillion economy.

"Fighting against the coronavirus for the residents of Tokyo is my first and foremost responsibility,'' she said on the eve of the election. In her campaign message online, Koike pledged to balance disease prevention and the economy under Tokyo's "new normal.''

Tokyo's infections started to rebound in late June to reach 131 confirmed cases on Saturday, topping 100 for a third straight day and hitting a two-month high. New daily cases have also spiked in recent weeks nationwide to about 19,700, including 977 deaths.

Koike's challengers included popular actor-turned-politician Taro Yamamoto and veteran lawyer Kenji Utsunomiya. Yamamoto wanted to cancel the Tokyo Olympics -- which were postponed from this summer to next summer -- and use the funds to help people hurt by the coronavirus crisis. Utsunomiya, known as the Bernie Sanders of Japan, called for for better welfare support for a more inclusive and diverse society.

Koike's victory was expected, with a recent poll by the Mainichi newspaper having her leading her opponents by a wide margin.

Outside a polling station in downtown Tokyo, retiree Hidekazu Tamura said he voted for Koike because of her effort to secure the Olympics. "I say no to anyone who is against the Olympics,'' he said.

Another voter, Yojiro Tsuchiya, said he doesn't think Koike has addressed growing concerns about the latest jump in infections. "I don't think they have a clear grasp of the current situation,'' he said, adding that he voted for Utsunomiya, who is pushing for more expanded testing.

Among other things, Koike says Japan should have its own version of the Centers for Disease Control and Prevention. She also tried to gain public understanding for a simpler version of the Tokyo Olympics after the games were postponed.

Though Koike has not fully delivered on promises to Tokyo residents to relieve congestion on commuter trains, ensure adequate availability of child and elder care facilities and end overwork, even her critics have generally lauded her handling of the pandemic. That's in sharp contrast to Prime Minister Abe, who has been criticized for doing too little, too late.

As the pandemic deepened in the spring, Koike often upstaged fellow conservative Abe, whose support ratings have plunged due to his handling of the crisis and its severe impact on the economy, on top of a slew of scandals.

A former TV newscaster, Koike is stylish and media savvy. She earned the nickname "Migratory Bird'' for hopping between parties and forming new alliances -- at least seven times -- a rarity among Japanese politicians, who are known for their loyalty to party factions. (AP)