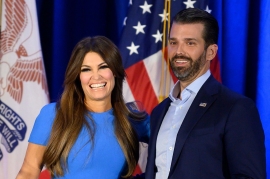 Kimberly Guilfoyle, the girlfriend of President Trump’s eldest son and a top fund-raising official for the Trump re-election campaign, tested positive for the coronavirus on Friday before a Fourth of July event at Mount Rushmore, New York Times reported, citing a person familiar with her condition. Trump campaign later confirmed Guilfoyle has contracted the virus.

Ms. Guilfoyle traveled to South Dakota with Mr. Trump’s son Donald Trump Jr., in anticipation of attending a huge fireworks display where the president was set to speak. They did not travel aboard Air Force One, according to the person familiar with her condition, and she was the only person in the group who tested positive.

As a routine precaution, people who come in close contact with Mr. Trumpare screened for the virus.

Ms. Guilfoyle is the third person in possible proximity to Mr. Trump known to have contracted the virus. A personal valet who served Mr. Trump his food and the press secretary for Vice President Mike Pence tested positive for the virus in May.

Ms. Guilfoyle was not experiencing symptoms, the person familiar with her condition said. She and the younger Mr. Trump never met up with the president’s entourage, the person said. Out of caution, the couple plans to drive back from South Dakota to the East Coast, the person said. (Bloomberg)