Cold case cracked? Police own up to past brutality, close probe on notorious serial killings

Man fighting to prove innocence gets apology after 31 years 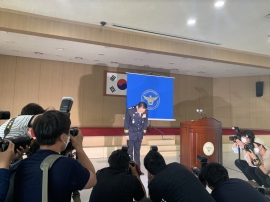 SUWON, Gyeonggi Province -- Police said Thursday they have wrapped up their probe into a series of slayings and rapes from over three decades ago, and issued the first formal apology over past episodes of brutality against then-suspects.

Officials at a police agency in Gyeonggi Province said in a press conference that Lee Chun-jae, 57, would be sent to prosecutors for 14 killings and nine rapes that took place in Hwaseong between 1986 and 1991. While Lee pleaded guilty to a total of 34 counts of sexual assault, police said they were unable to find enough evidence for the other 25.

Senior investigator Ban Ki-soo, who led the probe, said police have concluded Lee is the real culprit in the long-running cold case.

“In addition to the DNA evidence, Lee provided details only someone who was there would know. He was even able to fill in the missing gaps in the probe records that were eventually substantiated by subsequent findings,” he said.

Ban said the dozen profilers who interviewed Lee 52 times over the last 10 months described him as “a sexually frustrated man with psychopathic tendencies.” The profilers said he appeared “unapologetic and smug” discussing his crimes, and that he consistently deflected the blame onto the victims.

As for targeting only girls and women in the crime spree spanning five years, police said they believe the prime motives for Lee’s crimes stemmed from the desire to vent his pent-up sexual frustrations. His victims ranged in age from 13 to 71.

In an unprecedented gesture, police also admitted to having used violence to force a false confession out of an innocent man.

The agency’s chief Bae Yong-ju took a deep bow as he apologized for all those who fell victim to police brutality during the course of the investigations. One of them is a 53-year-old man surnamed Yun who was jailed for 20 years for a crime that police now deem was committed by Lee.

Yun was only 22 years old when he was convicted and given a life sentence for the September 1988 rape and murder of a 13-year-old girl. He was released on parole in 2009 and lived in a house for ex-convicts until recently. He claims police tortured him into giving a forged admission.

Bae vowed the agency would “do all that is necessary” to help Yun find justice. In January, Yun was granted a retrial through which he hopes to overturn the conviction.

In the police’s desperate quest to catch the killer, nearly 3,000 people came under the radar as suspects. Police revealed at least three died by suicide following interviews.

Police said they were charging eight officials and investigators with abuses of authority and unlawful detention, although many project their chances of being prosecuted are close to nil.

Police reopened the serial rape-murder case in August last year when a new forensic technology enabled analysis of old samples. Lee emerged as a key suspect after a DNA match linked him to three of the unsolved murders. When police found him, Lee was already serving a life term in Busan for the rape and murder of his sister-in-law in October 1995.

As the statutes of limitations have expired for all 23 cases, it is highly unlikely Lee will face added punishment even if his guilt is established.