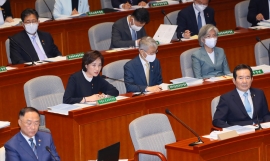 The country’s third and largest-ever extra budget plan cleared a minor hurdle Tuesday as the ruling Democratic Party forges ahead with the review process despite the absence of the main opposition party following fierce strife between the rival political groups.

Speaking at the National Assembly, Prime Minister Chung Sye-kyun urged lawmakers to pass the supplementary expenditure bill swiftly as the country’s economy is still experiencing serious difficulties despite the injection of two relief packages worth a combined 23.9 trillion won in March and April.

“I ask for cooperation in the passage of the budget so that it can help overcome the unprecedented crisis stemmed from the new coronavirus and can be used as a foundation to create a new growth engine for the post-COVID-19 era,” he said.

Several committees including those for small and medium-sized enterprises and startups, education and culture revised their budget plans to support universities that have come under pressure to refund tuition fees due to poor quality online classes and to fund the development of the movie industry, which has been hit hard by the pandemic.

For the next step, a special parliamentary committee on budget and accounts began its deliberation on Tuesday before referring it to a plenary parliamentary session for the final nod.

Lawmakers of the United Future Party didn’t attend the review meetings as they boycotted all parliamentary sessions following the Democratic Party’s decision to occupy all standing committee chief posts on Monday.

The extra budget has been on hold since the government submitted it on June 4 due to delays in structuring the new National Assembly.

Frustrated by its failure to reach an agreement with the main opposition United Future Party over how to form the new unicameral parliament, the Democratic party pushed ahead with installing its own members as chairs of all of the parliamentary standing committees Monday.

On Tuesday, Finance Minister Hong Nam-ki said the budget would benefit over 6.4 million people if implemented, echoing President Moon Jae-in’s remarks last week that the delay in handling the supplementary budget bill would increase the suffering of the people.

While the ruling party wants to pass the budget within this month’s extraordinary session which ends Friday, the opposition party said it would only participate in the budget review process if they had one more week for deliberation.

“It is impossible to complete the review of the enormous budget of 35 trillion won in just three days,” Choi Hyung-du, the party spokesman said.

It also plans to file a constitutional complaint with the Constitutional Court over the National Assembly speaker’s forced allocation of the party’s lawmakers to standing committees without consultation.