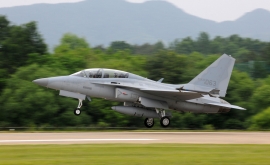 Despite an export crunch, South Korean defense firms are powering through the coronavirus outbreak with the help of domestic contracts.

The TA-50 is a lead-in fighter trainer that was developed by adding a weapons system and a radar to KAI’s supersonic advanced trainer jet T-50.

“The defense contract is expected to help small and mid-sized aircraft companies to weather out financial difficulties and keep employees on the payroll when the domestic aircraft manufacturing industry is going through turbulent times amid the COVID-19 outbreak,” a KAI official said.

On top of the deal, KAI is expected to sign a 1.3 trillion-won deal with the Army to supply 60 Surion choppers in the fourth quarter, according to NH Investment & Securities. 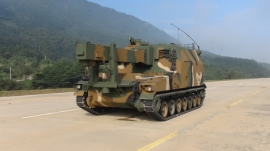 Meanwhile, Hanwha Defense, a leading land systems manufacturer in South Korea, has been immune to the COVID-19 outbreak, winning domestic contracts worth 1.2 trillion won in the first half of this year, a 500 percent increase on-year.

According to Hanwha Defense, it inked a 380.3 billion-won deal with DAPA on Monday to supply K56 ammunition resupply vehicles, a robot-type ammunition carrier that automatically supplies ammunition to self-propelled howitzers.

Also, Hanwha Defense signed a 251.7 billion-won contract with DAPA on the 30-mm anti-aircraft gun wheeled vehicle system last Wednesday, replacing the aging Vulcan Air Defense System that has been used by the country’s Army, Air Force and Marine Corps for a long time.

The new system is expected to help enhance the military’s low altitude air defense capability against low-flying aircraft and drones, according to DAPA.

At the same time, Hanwha Defense has won lucrative maintenance, repair and operations (MRO) deals, cementing its dominant presence in the Army.

Hanwha Defense is expected to sell K105A1 self-propelled howitzers and sign another MRO deal on assault amphibious vehicles for the Marine Corps in the second half of this year, according to the company. 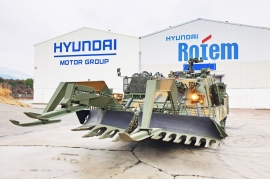 Hyundai Rotem, the rolling stock and arms manufacturing unit of Hyundai Motor Group, is another defense firm that has given a financial breathing room from DAPA.

According to Hyundai Rotem, it signed a 236.6 billion-won contract to supply combat engineering vehicles by 2023, though the deal was originally scheduled for the second half of this year.

Combat engineering vehicles can remove obstacles and landmines and secure a safe passage in the battlefield.

Also, Hyundai Rotem signed a 63.2 billion-won depot maintenance deal with DAPA on armored recovery vehicles that tow or repair damaged, stuck or inoperable armored fighting vehicles in the battlefield and on armored vehicle-launched bridges, a combat support vehicle that can deploy bridges over gap-type obstacles such as rivers.