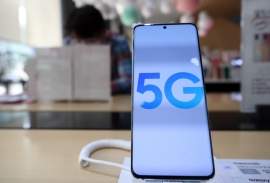 South Korean smartphone users' connection to 5G network services is far lower than expected, with 5G users only able to use the fastest network 15 percent of the time, a report showed Tuesday.

Users of SK Telecom Co., the country's largest mobile carrier by subscribers, spent just 15.4 percent of their time connected to the 5G network, followed by No. 3 mobile operator LG Uplus Corp. at 15.1 percent and KT Corp. at 12.5 percent, according to the report from industry tracker Opensignal.

For the remainder of the time, 5G users had to rely on 4G networks, according to the report, which tracked 218,095 devices in the country from Feb. 1 to April 30.

When connected to 5G, LG Uplus users enjoyed the fastest download speeds of 237.2 Megabits per second (Mbps), followed by SK Telecom at 220.4 Mbps and KT at 214.8 Mbps, according to the report.

South Korea has been aggressively pushing to expand the 5G network, with the three carriers set to invest a combined 4 trillion won ($3.3 billion) on expanding the new 5G infrastructure in the first half of this year.

Despite their strenuous efforts, 5G coverage has been limited here, especially in indoor environments, leading to consumer complaints. To address such issues, the government aims to install around 2,000 indoor 5G base stations this year.

As of April this year, there were 115,000 5G base stations in the country, far smaller than the 870,000 4G LTE stations that provide nationwide coverage, according to the ICT ministry.

The country aims to establish nationwide 5G coverage by 2022.

The carriers have tested standalone versions of 5G services under limited conditions this year, although they have yet to be launched commercially.

Mobile equipment makers have called for the launch of a standalone 5G network mode and the commercialization of a 28-gigahertz (GHz) band to ensure lower levels of latency and complete real 5G speeds, which can be up to 20 times faster than LTE.

South Korea currently only uses the 3.5-GHz band, which operates at lower speeds.

"In order to realize the full-fledged 5G service, South Korea needs to adopt the standalone mode," said Kwon Kyoung-in, chief technology officer at Ericsson-LG, during a press conference in Seoul. "High speeds and ultra-low latency are only possible when the 28-GHz band is commercialized."

The United States has commercialized the 28-GHz band, and Japan is expected to commercialize the band in the next two months, Kwon added. "South Korea needs to show the leadership it has maintained," he said.

There were 6.9 million 5G users in South Korea as of the end of May, which account for 10 percent of the country's 69 million mobile subscribers, according to data from the ICT ministry.

Analysts expect the number of the country's 5G subscribers to reach 10 million by the end of this year as more 5G phones are released, such as Samsung Electronic Co.'s Galaxy Note 20. (Yonhap)