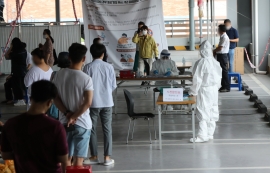 South Korea's new virus cases were below 50 for the second straight day Tuesday, but cases traced to religious gatherings continued in addition to a rise in imported cases.

Health authorities said they could regulate small-scale gatherings tied to churches if the virus continues to spread across the country through such meetings.

The country added 43 cases, including 23 local infections, raising the total caseload to 12,800, according to the Korea Centers for Disease Control and Prevention (KCDC).

The country's health authorities remain anxious about a potential new wave of virus outbreaks in the summer amid sustained rises in local infections and cases coming in from overseas.

Of the locally transmitted cases, 13 cases were reported in the densely populated Seoul and the surrounding area.

The virus is spreading fast beyond the greater Seoul area, spawning concerns over a further virus spread into other parts of the country.

The central city of Daejeon reported a total of 121 cases, including two elementary school students who came into close contact with a classmate, the KCDC said. The infection of the fifth graders marks the first time that the virus has spread between students, after education authorities permitted schools across the country to reopen in stages several weeks ago.

There were three cases reported in Gwangju, 329 kilometers south of Seoul, with one case each being confirmed in the eastern Gangwon Province and North Chungcheong Province that sits in the country's central region.

Health authorities voiced concerns that virus transmissions traced to small gatherings have continued to become a drag on their efforts to contain the virus spread.

"Stronger restrictive measures will be in place if COVID-19 continues to spread through small gatherings," Yoon Tae-ho, a senior health official, told reporters without elaborating.

But it is not the time for the country to consider raising the degree of social distancing to Level 2 as the current virus situation is manageable with the medical system, Yoon said.

The KCDC earlier said the country is currently in the first of a three-level social distancing scheme as the number of daily new virus cases, mostly below 50, is manageable with its virus response capability.

South Korea's vice health minister said the country still has a long way to go in its virus fight as it may have to brace for a protracted pandemic.

"The biggest challenge ahead of us is fears that the COVID-19 pandemic will not end soon," Vice Health Minister Kim Ganglip said at a peace forum, hosted by Yonhap News Agency.

Cluster infections tied to churches in the greater Seoul area have emerged as the bugbear in the country's virus fight.

"We call for people to take precautionary steps in a bid to prevent the virus from spreading through gatherings," KDCD Deputy Director Kwon Joon-wook said in a briefing.

Cases traced to a major church in Seoul's southwestern ward of Gwanak reached 31 as of noon, up three cases from the previous day.

Those tied to a church in Anyang, south of Seoul, reached 23, up one over the past 24 hours.

Cases linked to a Buddhist temple in Gwangju rose by two to 14.

Health authorities are juggling the idea of adopting "effective" measures to stem the spread of the virus in connection to churches and other religious facilities.

South Korea has been gripped by rises in sporadic cluster infections in the greater Seoul area since it relaxed strict social distancing on May 6 on the back of the flattened virus curve.

Health officials warned that they may consider expanding tougher infection preventive measures -- currently in place only in the Seoul metropolitan area -- across the country if the virus situations get worse.

The portion of cases whose transmission routes are unknown reached 11.5 percent over the past two weeks, according to the KCDC. Such cases are on a rise, putting a strain on health officials' virus fight.

The KCDC said it has been conducting antibody tests on some 3,000 blood samples in a bid to gauge people's immunity against the coronavirus.

"As the outcomes of foreign studies show, it appears to be an elusive hope to believe that herd immunity has been built in the community," Kwon said, adding that South Korea may not be different from other countries.

The country, meanwhile, reported 20 additional imported cases, raising the total such cases to 1,582.

Imported cases, once the main source of virus cases here, fell to a single-digit figure early this month after the country strengthened quarantine measures on all international arrivals in April.

But such cases have bounced back to double-digit numbers since mid-June.

The total number of people released from quarantine after full recoveries stood at 11,537, up 108 from the previous day.

Related to broader efforts to tackle the outbreaks that are expected to continue until a treatment drug or vaccine has been developed, a meeting of the state infectious disease management committee called for more hospital beds to be set aside for COVID-19 patients and the hiring of at least 130 more epidemiology investigators.

The committee said the central, southeastern and southwestern regions need to be prepared for more outbreaks and that there is a need to assess the size of the national strategic stockpile to counter infectious illnesses going forward.

It then advised that dedicated infectious disease support boards be formed for large cities and existing laws be changed to better prevent the inflow of people who may bring in the illness from abroad. (Yonhap)