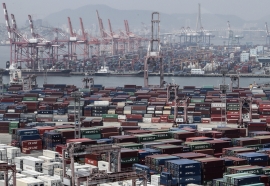 South Korea is expected to see an accelerated slowdown of its potential economic growth rate, with domestic and global economic structures facing radical transformation in the post-coronavirus era, the central bank said Monday.

“Due to COVID-19, Korea’s potential growth rate faces a sharp decline, with changes in economic structures regarding labor, trade and industries coupled with sluggish input of factors linked to labor and capital,” the Bank of Korea said in its latest report.

The report noted that the nation’s labor market is projected to see a decline in workforce participation rate and growth in prolonged structural unemployment.

A slowdown of trade and traditional forms of manufacturing will be hastened by the corporations’ unwillingness to expand following the financial crisis.

But the central bank added that the nation’s expansion of the information and communications technology sector as well as biotechnology could improve productivity and decelerate the momentum of potential growth rate decline.

The government recently announced a Digital New Deal to create more jobs in the tech sector and spur digitalization of industries to cope with risks from the latest pandemic.

Economic structures of households, corporates and governments in domestic and key overseas economies are also expected to be transformed by the virus.

Households will further avoid high-risk activities and investments as they experience unemployment, lower incomes and limitations of economic and social activities. They are expected to turn to saving rather than spending.

Firms will cut back on investments and put weight on strategies that could help them cope with volatilities, while governments will put national interests and establishing social safety nets as their priorities.

With the COVID-19 shedding light on the holes in the global supply chain, deglobalization will be accelerated with economies bolstering trade protectionism, promoting local trade and limiting contact between entities.

In a separate report released the same day, the central bank said that the global time frame for the end of the pandemic has been delayed since last month’s projections. Last month, it lowered the nation’s growth forecast by a whopping 2.3 percentage points to minus 0.2 percent under the scenario that the virus cases would surge in the second-quarter and proceed to calm down later in the year.

“Though the cases have been falling in Europe, they have been surging in emerging economies such as Brazil and India, contributing to the overall rise in cases,” it said.

“But it is not the time yet to adjust the growth forecast as it is too early to resume economic activities and the time frame concerning the end of the pandemic has been delayed.”