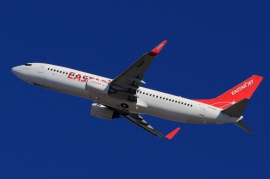 Korean budget carrier Eastar Jet founder Lee Sang-jik, who is also a member of the ruling Democratic Party of Korea, said Monday that the ownership family will contribute all their shares, worth around 41 billion won ($34.2 million), to Eastar Jet to “save the company,” amid growing uncertainty in an acquisition plan by fellow low-cost carrier Jeju Air, due to wage issues following the latest pandemic shock.

But with the ongoing tit-for-tat argument between the two low-cost carriers, it remains unclear whether or not the ownership family’s offer will spur Jeju Air’s acquisition of Eastar Jet, which has been halted since March.

“Eastar Jet has been seeking a breakthrough after Jeju Air’s request for acquisition last year, but the process has not been smooth due to closure of international routes following aggravated ties with Japan last year and the economic turndown following the latest virus outbreak,” Lee wrote in a statement. His statement was read by Eastar Jet Executive Director Kim Yoo-sang during a press conference held at Eastar Jet’s headquarters in Gangseo-gu, Seoul, on Monday.

“I had to make a decision as an Eastar Jet founder, since Jeju Air and Eastar Jet’s M&A deal is being delayed and has caused suspicions and a sense of crisis,” he added.

He also apologized over the delay in making payments for its workers.
Lee founded Eastar Jet in 2007. Eastar Holdings is the holding company of Eastar Jet. Lee’s 31-year-old daughter Lee Su-ji, CEO of Eastar Holdings, holds a 33.3 percent stake in the company, while 21-year-old son Lee Won-jun holds 66.7 percent.

Less than a year after Eastar Holdings was established in 2013, the company purchased a 68 percent stake in Eastar Jet for around 10 billion won.

Eastar Jet CEO Choi Jong-ku said during a press conference that “we pay respect to the decision made by the founder and the owner family, and strongly demand that Jeju Air will hurry the M&A process with sincerity.”

“Difficulties that Eastar Jet have been suffering are due to us, but Jeju Air is also not free from responsibility,” Choi added.

In March, Jeju Air signed a deal to acquire a controlling 51.17 percent stake in Eastar Jet from its parent Eastar Holdings for 54.5 billion won.

But since the outbreak of the novel coronavirus, Eastar Jet suspended all of its flights in March and its 1,700 employees went on paid leave.

Eastar Jet said Jeju Air had said it would guarantee wages for Eastar employees after the signing, but they changed their words in May as the COVID-19 spread worsened. Unpaid wages for Eastar Jet workers total about 24 billion won, according to the air carrier.

But Jeju Air refuted the statement and said it was Eastar Jet’s management that has delayed payments to its subcontracted companies and oil refiners.

Earlier this month, HDC said it hopes to renegotiate its deal for acquiring Asiana Airlines, given the business turmoil caused by the COVID-19 pandemic, requesting Asiana’s creditors and its largest shareholder Kumho Industrial modify the conditions of the takeover.

It added that it has not received “sufficient and trustworthy data” about Asiana’s financial status.

Although HDC’s planned acquisition of Asiana Airlines has been delayed to the second half, industry insiders said it is not a worst-case scenario for HDC yet.

“Considering that it can postpone the deal closing date an additional six months, there is room for acquisition requirements to be changed advantageously to HDC, who holds the keys now,” said an industry insider.

In December, an HDC-Mirae Asset consortium inked a deal with Kumho Industrial to acquire its controlling 31 percent stake in the country’s second-largest air carrier under a plan to diversify its business portfolio.

But due to the outbreak of COVID-19, Asiana has scaled back services on 79 percent of its lucrative China routes and suspended most of its international routes.

This undermined the air carrier’s fiscal health, raising concerns that HDC might back away from its plan to acquire the company for 2.2 trillion won.

Asiana’s debts jumped by 4.5 trillion won from July last year to March this year, and its debt-to-equity ratio skyrocketed by 16,126 percent during the same period.