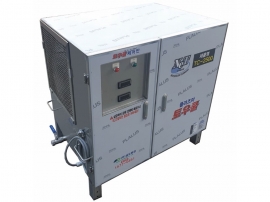 Samdo Environment is a South Korean company that has developed plasma-generating machines designed to get rid of stenches at livestock farms and the risk of exposing animals to potential viral, bacterial and parasitic infections.

The company’s machine utilizes a technology that creates plasma by applying a strong electrical field. This creates ozone that reacts with harmful gases and dissipates in the air.

Samdo Envrionment‘s technology is eco-friendly and does not require any sort of chemical feedstock to operate.

According to the company, its machines are capable of eliminating 95 percent of odor-making substances like ammonia, hydrogen sulfide and acetic acid. It can sanitize 99.9 percent of viruses, harmful bacteria and molds inside of livestock farms.

The company said the machines also come with a feature that automatically removes ammonium nitrate -- residue that quickly builds up and causes mechanical failures.

The plasma technology was developed in 2017 and patented by the company and Korea Environment Corporation. Samdo Environment tested the technology at a government-led livestock research institute in South Chungcheong Province before launching related products.

Samdo Environment’s technology later received a certification from the Ministry of Food and Drug Safety for developing the plasma-generating technology.