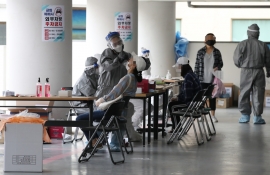 South Korea said Sunday it will implement a three-level social distancing scheme as the country's daily new coronavirus cases rebounded to over 60 without showing signs of slowdown.

The country added 62 cases of COVID-19 as of midnight, including 40 local infections mainly involving religious gatherings, raising the total caseload to 12,715, according to the Korea Centers for Disease Control and Prevention (KCDC).

The tally marked a rise from 51 on Saturday to bounce back to over 60 for the first time since hitting 67, the most in a month, on June 20.

Health officials have warned that they could consider expanding tougher infection preventive measures -- currently in place only in the Seoul metropolitan area -- across the country, if virus situations get worse.

The KCDC said Sunday the government will adopt three levels of social distancing and countermeasures, depending on the severity of the COVID-19 outbreak.

The country currently recommends Level 1 social distancing, which is implemented when the number of virus cases is manageable by the medical system. The government plans to apply Level 2 distancing measures if daily infections exceed 50 for 14 straight days but remain below 100, and Level 3 measures if daily infections far exceed 100, the KCDC said.

At least 17 countries, including Singapore, Britain, and Taiwan, and some US states, are limiting or have banned group meetings and events amid the pandemic, the KCDC said.

Under the current Level 1 distancing, the government said Sunday it would allow spectators to start attending sports events as early as this week, on condition that strict infection preventive measures are taken.

Sports leagues are expected to sell tickets for about 30 percent of their stadium capacity in the beginning, and then gradually increase that number.

Of the locally transmitted cases, 13 were reported in densely populated Gyeonggi Province surrounding Seoul, 13 in Seoul and six in Daejeon, about 160 kilometers south of Seoul, the KCDC said.

South Korea has been gripped by sporadic cluster infections since it relaxed social distancing on May 6. The greater Seoul area accounted for most of the newly added cases this month.

The continued rise in new local infections in the metropolitan area is due to new cases related to churches that have emerged as sources of cluster infections.

Eight followers of Wangsung Church in Seoul's southwestern ward of Gwanak were newly confirmed to be infected on Sunday, bringing the related cases to 27 since a 31-year-old woman was first identified as infected on Wednesday.

A total of 1,962 people, including some 1,700 church followers and their family members, is undergoing COVID-19 tests, with the results expected in the coming days.

The KCDC said a total of 18 infections, up seven from a day earlier, has been reported in connection with a church in Anyang, a city just south of Seoul.

Three members of a church in Suwon, just south of Seoul, were also newly confirmed on Sunday, the KCDC said. A total of 717 people participated in four different church services with the COVID-19 patients, according to the KCDC.

The southern city of Gwangju, which had reported relatively low numbers of COVID-19 cases, reported four new cases on Sunday for the first time in nearly three months, the KCDC said. All of the new four cases were locally transmitted.

Health authorities are on alert over rising trends in cluster infections, with most traced to door-to-door retailers, churches and day care centers for senior citizens.

The authorities said they have not been able to trace infection routes for 71 out of 631 new patients over the past two weeks, or 11.3 percent.

The portion of infections tied to untraceable transmissions exceeded 10 percent on June 15, for the first time since the authorities began counting such data on April 6.

The ratio is between 10 and 11 percent level this month, they said.

The country is also struggling to stem cases coming in from overseas -- once the main source of virus cases here -- as the number of such daily cases has continued to show double-digit increases since mid-June.

A total of 22 additional imported cases were reported on Sunday, with 16 of them detected at quarantine checkpoints, the KCDC said.

Of the total, 18 were from Asia, followed by three from the United States and one from Europe, the KCDC said.

Imported cases, once the main source of virus cases here, fell to a single-digit figure early this month after the country strengthened quarantine measures on all international arrivals in April.

But such cases have bounced back since mid-June, with double-digit numbers reported for a total of 11 days in June, the KCDC said.

South Korea, meanwhile, reported no additional deaths, with the total death toll remaining at 282. The fatality rate was 2.22 percent.

The total number of people released from quarantine after full recoveries stood at 47, bringing total cured patients at 11,364.