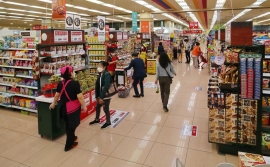 South Korea’s consumer sentiment rebounded for the second straight month in June, but was still far more pessimistic than the neutral view held at the beginning of the year, data showed Friday.

The Composite Consumer Sentiment Index, or CCSI, rose for the second consecutive month to 81.8, up 4.2 points on-month, according to data from the Bank of Korea. This was the highest level since it recorded 96.9 in February.

The CCSI is an economic indicator that measures consumers’ optimism for the national economy based on six variables, including current living conditions, household income and spending. A CCSI figure above 100 indicates optimism, while a reading below 100 means people are pessimistic about the economy.

The latest index, however, failed to recover to the pre-coronavirus levels. The CCSI hovered at about 100 from November 2019 to January 2020, when the COVID-19 dynamics had yet to pick up steam.

“Consumer confidence has been buoyed by a series of government measures to revive the local economy as well as stock market rally amid pandemic, driving up the CCSI indexes related to the country’s economic conditions and households’ livelihood in June,” said Lee Hye-lim, a manager at the BOK’s statistics research team.

The Korean government is pushing for the country’s largest ever supplementary budget, worth 35.3 trillion won ($29 billion), intended to support local businesses and households in the face of the COVID-19 pandemic. In addition, the BOK slashed its policy rate to a historic low of 0.50 percent in May to boost market liquidity.

Meanwhile, the nation’s main bourse Kospi benchmark has climbed to pre-coronavirus levels on hopes of an economic recovery and stimulus. The index hit 2,140.0 on average between June 1 and June 17, higher than the previous month’s average of 1,965.2, the BOK said.

People’s optimistic views on their current state of living surged by 5 points to record 84 in the cited period, doing the most to bump up this month’s CCSI index as it accounts for 1.3 points of the total gains totaled at 4.2.

Indices for people’s sentiment toward the nation’s current economic conditions marked 44, up 8 points from the previous month, data showed.

Views on inflation over the past year remained flat at 1.7 percent and forecasts for inflation in the following year also stayed the same at 1.6 percent, the lowest since January 2013 and February 2002, respectively.