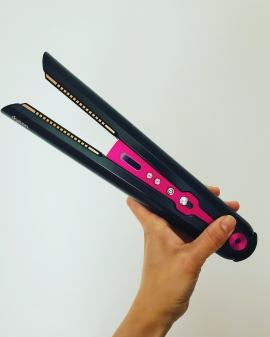 As most of my naturally-curly-haired peers would agree, there is nothing more annoying than coiled bangs. They make you look less composed and childish, not to mention adding a few pounds to your face.

So I jumped at the chance to try out Dyson Corrale straightener, the latest hot item from the cordless masters.

Almost immediately, I found it extremely convenient to use during busy mornings to fix by bangs, without having time to wash and dry my hair.

The gadget is usually placed on the charging dock. The cordless straightener is powered by a lithium-ion battery for about 30 minutes per charge.

A small OLED screen shows that it’s on, and then the user gets to choose the temperature that best suits their hair condition. The straightener has three heat settings, promoted as “intelligent heat control,” at 165, 185 and 210 degrees Celsius.

The user interface of the device is very simple and intuitive. I hardly read the manual.

The most satisfying part was that it takes less than a minute to heat up the device.

According to Dyson, the intelligent heat control system uses a platinum sensor and the temperature is regulated 100 times a second.

This technology communicates with a microprocessor, which in turn, controls the heating system to deliver precise and accurate heat, the company explains.

The heating plate is also billed as high-tech.

Dubbed as “flexing plate technology,” the plates are made of a complex manganese copper alloy, featuring a balanced amalgamation of six metals. This allows better flexibility, strength and thermal conduction, according to Dyson.

Each plate is precision machined to 65 microns – the width of a human hair.

Compared with traditional straighteners, the flexing plates made gathering and shaping the hair easier.

The company says it is because the plates adapt to the hair and apply tension more evenly and stop strands from splaying. They make the hair styling less rely on heat, so reduces damage by 50 percent.

On a less positive note and besides all the tech jargon, I felt the device was quite heavy to use for a long period of time, which somewhat negates the benefits of it being cordless.

It is said to weigh 560 grams, but it feels heavier, probably due to the battery.

I asked a professional hair stylist to join me in giving a feedback.

“It is good for using at home for a quick fix and simple styling, but it would be too heavy to use for over 10 minutes to straighten or style all hair for professional purposes,” she said.