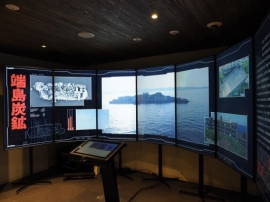 The Ministry of Culture, Sports and Tourism on Sunday denied reports that it had planned to officially ask UNESCO to delist Japan’s historical industrial sites, including Hashima Island. In 2015, Japan had promised the center would include information on the Koreans who were forced to work at the site during that country’s 1910-45 colonial rule over Korea.

Although it denied plans to take any immediate official action, the Culture Ministry added that it was currently discussing the matter with other concerned ministries, such as the Ministry of Foreign Affairs.

The Culture Ministry’s statement came after local news outlets reported on Sunday that Culture Minister Park Yang-woo had announced plans to send an official letter to UNESCO requesting the removal of Japan’s industrial sites from UNESCO’s list of World Heritage Sites, since Japan had not kept its promise. The new Industrial Heritage Information Center in Tokyo provides information on the 23 Meiji-era industrial sites that have been inscribed on the UNESCO list, of which seven employed forced labor from Korea and other Asian countries during World War II.

According to news reports, the Culture Ministry made the announcement Thursday during a policy report to members of the ruling Democratic Party. Cultural Heritage Administration head Chung Jae-suk was also reported to have said during the session that the agency would dispatch a staff member to the new center in Tokyo to find out more about the situation.

Japan’s initial pledge in 2015 was made in response to a protest from Seoul against Japan’s bid to have UNESCO designate Hashima Island and other wartime industrial sites as World Heritage Sites.

At the time, Japan promised to inform the public that a large number of Koreans had been brought to the sites against their will and forced to work there. Upon receiving the designation five years ago, Japan again vowed to ensure that the victims would be remembered at its information center.