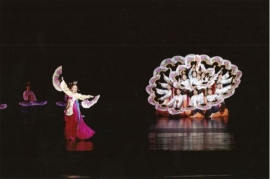 “Kimbaekbong Buchaechum,” a traditional form of Korean dance using fans from South Pyeongan Province in North Korea, will be performed during a concert held to mark the 70th anniversary of the Korean War in Jeonju, North Jeolla Province, on June 24 (CHA)

The Cultural Heritage Administration will hold an offline in-person performance to mark the 70th anniversary of the Korean War.

While many events and concerts to mark the war here are set to take place online due to the ongoing spread of COVID-19, the CHA will hold the offline concert at its National Intangible Heritage Center’s concert hall in Jeonju, North Jeolla Province, on June 24.

This performance’s main theme will be about Koreans coming together and becoming united through intangible heritage. Audiences will be able to enjoy both South and North Korean traditional performances, according to the CHA.

The performance will include mask dance drama “Bukcheong Saja Noreum,” which used to be performed during Jeongwol Daeboreum, a traditional holiday marking the first full moon of the Lunar New Year in North Korea’s North Hamgyong Province.

The CHA emphasized that the event is prepared jointly by successors of the national intangible cultural heritages and artists who are North Korean defectors.

The performance organizer added, under strict quarantine guidelines to prevent possible COVID-19 infections, all audiences must provide personal information, sanitize their hands and wear masks. The audiences also have to keep their distance from each other when entering the venue.

“There are a total of 300 seats in our concert hall. To leave a seat between each audience member, we will accept around 150,” an official from the National Intangible Heritage Center told The Korea Herald.

Reservation for the show can be made starting Wednesday through the National Intangible Heritage Center on (063) 280-1500, 1501 or the center’s website (www.nihc.go.kr). Admissions are free.

Meanwhile, CHA will also hold an academic conference and discuss the Korean War and its relation to the preservation of cultural heritage on Friday from 1:30 p.m. The conference will be livestreamed through its YouTube channel (https://www.youtube.com/cha). The conference is available to the public.