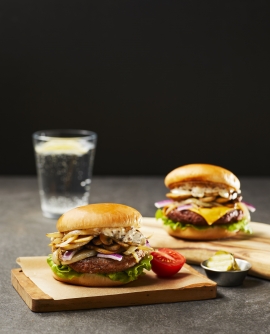 Kim Jin-kyung first encountered “fake meat” several years ago, when she had a Korean course meal at a restaurant. The idea of “bean meat,” a brownish lump neatly laid on a plate, was fascinating, but the taste came short of her expectations.

Years have passed and now Kim is having fun exploring different meat alternatives that are more abundant in flavor than her first experience.

“There are not many, but still some decent fake meat products that are plant-based and taste good, really similar to meat,” Kim, 33, told The Korea Herald.

“I’m not vegan, but I have vegan meals and buy meat analogues once in a while because my stomach feels more at ease having such meals.”

According to the Korea Vegetarian Union, there are about 500,000 strict vegans in South Korea, and about 1.5 million who pursue similar diets -- not a big target market for companies to easily start a new business on.

But the number of “flexitarians” or semi-vegans who occasionally pursue a plant-based diet, like Kim, is growing, and the figure could go up to 10 million when accounting for them, the union said.

“More people are interested in a healthy diet, and the awareness on animal rights and for a clean environment is also growing,” Lee Won-bok, the head of KVU, told The Korea Herald.

“Indeed, the number of vegans in South Korea has tripled from 10 years ago, when I started this union.”

The Korean market for meat analogue is nascent, while in other parts of the world it is big enough to spark debate as to whether imitation meat products should be allowed to use the word “meat” in their product descriptions and marketing.

Still, Korean companies are throwing their hats into the ring as they seek to establish a foothold in the market. 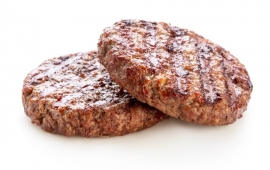 “Vegan products do not target only vegans anymore. We want to offer meat analogues as just another food choice for people looking for plant-based diets,” an industry official told The Korea Herald.

According to US market research firm CFRA, the world’s meat analogue industry is expected to reach 116 trillion won ($96.5 billion) in 2030, rising from 22 trillion won in 2018.

The world’s vegan market is also expected to grow to $24 billion in 2025, posting an average growth rate of 9.6 percent annually, according to Grand View Research.

Supermarket chain Lotte Mart launched the meat analogue brand Gogi Daesin, which translates to “meat substitute” in English, in its stores in May. The plant-based meat lineup that is produced by Viomix includes products imitating the taste of chicken nuggets and cutlets.

“People just think of plant-based meat analogues as bean meat, but that’s a story of the past. We now use various ingredients other than beans, and also use fiber to create the different textures of meat,” Jeong Jae-hee, an official from Viomix, told The Korea Herald.

For instance, Gogi Daesin will come as a choice for growing children who refuse to eat vegetables as a source of plant-based protein and fiber. It will also provide nutrition for elderly people who need to obtain protein but have difficulties in digesting meat, Lim explained.

While the retailer said its sales figures were not yet “adequate” to reveal, a Lotte Mart official said the company is continuing to work on plant-based meat analogues to gain a foothold in the market in advance.

Dongwon F&B signed an exclusive contract in December 2018 to import Beyond Meat from the US to South Korea. In March the next year, the food company introduced the flagship Beyond Burger products in the Korean market, and about 82,000 patties were sold here as of last year, according to Dongwon F&B.

The faux burger has accumulated sales of 50 million patties around the globe since its launch in the US in 2016.

This year, Dongwon added Beyond Beef and Beyond Sausage to its imported products.

There are also companies investing to develop cultured meat, which is a meat alternative produced from growing animal cells in a lab.

Korean fresh food company Pulmuone has invested in the US startup BluNalu, which develops seafood made from such cells. While Pulmuone has not revealed how much it invested, the US company received a total of $20 million in series A financing from five investors, including Griffith Foods, Nutreco, Pulmuone, Rich Product Ventures and Sumitomo Corp. of Americas.

Questions remain as to whether fake meat is really healthier than real meat, as opponents label them “ultraprocessed,” Still, the meat alternative market is a global trend that will inevitably expand, experts say. And the Korean market is likely to follow suit.

According to the UN’s Food and Agriculture Organization, the world’s population is expected to grow to 9.2 billion by the year 2050. Future demand for meat will reach about 450 million metric tons by then, and this leads to concerns that livestock farming will be unable to meet demand.

“Meat alternatives will gain more attention for their sustainability, and they cause less environment pollution,” Lee Hyun-jung, a researcher at Center for Food and Bioconvergence, an institute under Seoul National University, wrote in the 2019 report, “World Meat Alternative Development Trend.”

“But regarding the taste and texture there’s still much room for development in terms of their organoleptic quality -- flavor and texture,” Lee added.

“It is an inevitable trend. People now care about the environment, and the rights of animals, and they are more cautious of what they eat,” KVU head Lee said.