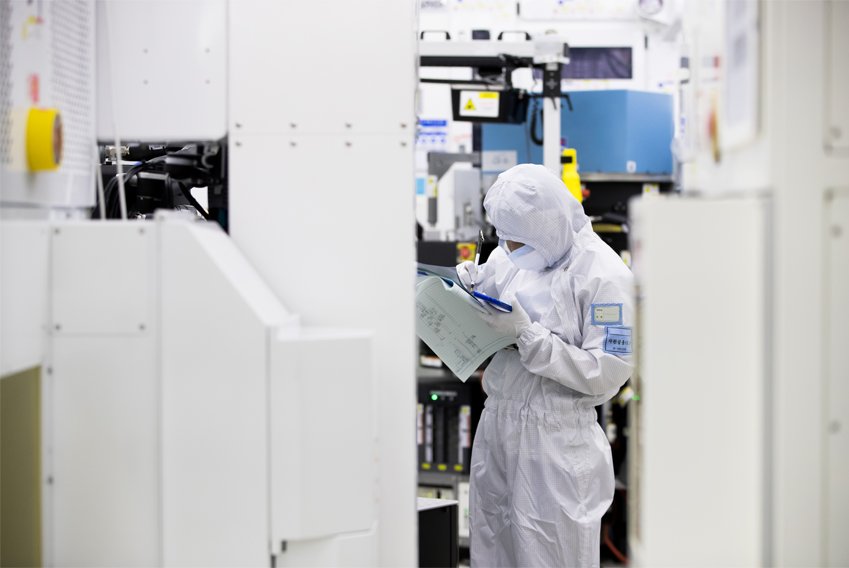 Samsung‘s memory fab in Hwaseong, Gyeonggi Province (Samsung Electronics)
China’s race to lead mainstream technology is intensifying not only against the US but also its neighbor South Korea.

President Xi Jinping has been public about China’s goals: By 2025, the country aims to domestically produce key technologies such as semiconductors, 5G equipment, robots, and self-driving and electric cars.

The coronavirus pandemic hasn’t derailed its ambition to win the technology battle with the US. Instead, Beijing has turned the deadly virus outbreak into an opportunity to advance its 5G technologies by trying out various applications.

Some believe that China has already edged past Korea in 5G technology, with drones dropping off face masks, spraying disinfectants and delivering hot meals to hospital patients -- just a few of its latest efforts to harness the 5G networks it deployed last year.

To keep China in check, the US is moving to increase semiconductor production by inviting chipmakers like Taiwan’s TSMC to open domestic plants to make it more self-sufficient in times of global crisis.

Some expect that the conflict between the US and China will further pressure Korea, which is already sandwiched between the two in the political arena.

As the tech battle between the world’s two biggest superpowers gets fiercer, it is natural that their capabilities rapidly evolve, threatening Korea’s position as an IT powerhouse.

The Korea Herald’s tech team looked into key areas to measure the technological gap between Korea and China to offer forecasts on how the competition will develop. This is the first in four installments.

While Korea remains peerless in the global memory chip market, industry observers notice that multiple Chinese fabless chipmakers have been showing stellar growth in the last five years, and they are eyeing the memory market as well.

According to data by US-based tech research firm Omdia, the average annual revenue growth of the top 10 Chinese chipmakers, including memory integrated circuit and logic IC developers, stood at 19.6 percent between 2015 and 2019, outpacing that of Korea’s 10 biggest chip manufacturers, including Samsung and SK hynix.

HiSilicon, the largest system-on-chip provider under Huawei Technologies, grew 22.7 percent during that period, leading China’s efforts to get a leg up in the semiconductor market since the government’s announcement to raise the country’s self-sufficiency rate of chips to 40 percent by 2020 and to 70 percent by 2025.

Korea’s Samsung and SK hynix recorded 7.9 percent and 8.6 percent growth, respectively, as they were confined to the memory market.

In the logic chip sector, it seems like China is taking advantage of economies of scale.

Benefiting from the vast size of its domestic market, it is easier for small fabless firms there to try designing and developing a variety of chips, contributing to a growth in quantity eventually.

The government-led plan to boost the semiconductor industry has given birth to more than a dozen unicorns -- startups worth over $1 billion -- that develop artificial intelligence-based chips, although some are thought to be overvalued.

Among the top 10 Chinese chipmakers by growth rate, just one, GigaDevice Semiconductor, is a memory provider, according to the Omdia data. The others provide logic chips, LEDs and sensors.

ChangXin Memory Technologies, the first Chinese memory provider, recently made it public that it would start mass producing DRAM on a 17-nanometer process within the year.

Industry experts speculate that the 17-nm DRAM manufacturing technology would be equivalent to the second generation of 17-nm DRAM by Samsung, which was commercialized in 2017.

That suggests that Korea is still three years ahead of China.

“Although China remains behind Korea in terms of both design and manufacturing technologies, it was noticeable that their memory fabs are filled with the latest equipment and equipped with cutting-edge solutions,” said Yoo Hoi-jun, professor at the electrical engineering department at Korea Advanced Institute of Technology, who had visited the CXMT plant located in Hufei, Anhui province, last year.

Earlier, another Chinese memory firm Yangtze Memory Technologies said it had completed development of 128-layer NAND Flash chips and will start churning them out this year, hinting that the technological gap is narrowing more quickly in the NAND market.

SK hynix aims to roll out the 128-layer NAND product in the second quarter of this year.

“Personally, I believe both Korea and China have many of the same market risks,” said Ron Ellwanger, senior analyst at Omdia.

“While Korea is very dependent on memory, logic markets are vulnerable to the economy and consumer confidence. So, the Chinese players are entering into the memory market. But we can’t discount brand trust and loyalty.”

“The Chinese do have a slight advantage because of the ‘big funds’ sponsored by the Chinese government,” he said, pointing out that the industry is very capital intensive.