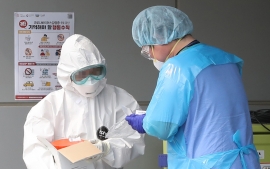 South Korea’s tally of coronavirus infections rose by 20 on Friday, with community spread of the disease lingering, health authorities said.

Counting the new cases, the virus has sickened 11,142 patients here, while the death toll remained 264, according the Korea Centers for Disease Control and Prevention.

“The proportion of patients in their 20s who contracted the virus at nightclubs, bars and karaoke establishments, among other places, is on the rise,” KCDC Director General Jung Eun-kyeong said at a briefing.

“We speculate there are more undetected patients in the community given the characteristics of the virus, which has many asymptomatic and mild patients,” she added, urging people in their 20s to keep their guards up against the virus.

Coronavirus patients in their 20s also made up the largest group of patients by age, accounting for 27.9 percent of total patients, or 3,111 people, followed by those in their 50s, 40s and 60s, according to the KCDC.

Health authorities lent weight to the outbreak in Seoul’s party district of Itaewon to have been imported from the United States and Europe based on a recent study.

The Itaewon cluster has spiraled into a mass infection, sickening 215 patients nationwide, as of 12:01 a.m. on Friday, according to the KCDC.

An educator in Incheon, who had visited Itaewon, transmitted the virus to one of his students, who then passed on the virus to a cab driver.

The cab driver took on a job as a freelance photographer at a baby’s birthday party earlier this month, and transmitted the virus to the 1-year-old infant, the infant’s parents and grandparents among others, health authorities said.

Nine were patients from overseas, of whom seven were confirmed at airport check points, it added.