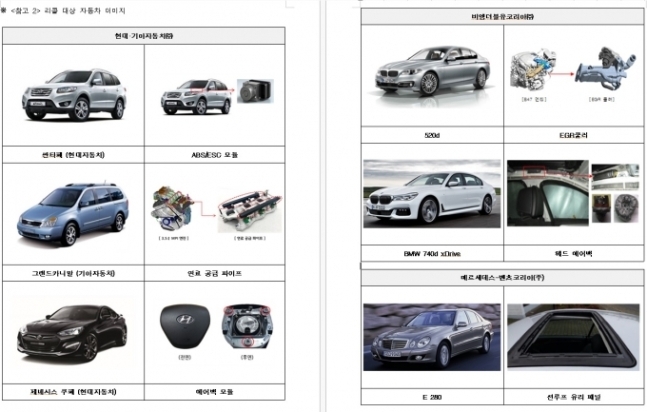 According to the ministry, 294,622 Hyundai Motor vehicles, including Santa Fes, were found to have foreign substances like oil and moisture inside their braking modules. The defect poses a fire hazard, the ministry said.

Cracks were found inside 241,921 cars made by BMW, in 79 models including the 520d. They were found to have cracks inside their exhaust gas coolers.

Another 50 BMWs were found to have poor protection for passengers, as the airbags on the side either unfolded too forcefully, or did not completely unfold.

Mercedes-Benz Korea will have 11,480 vehicles recalled, with 36 models affected, including the E280. The cars had defects in their sunroof glass, which can pose a risk to the cars behind the vehicle as the glass panel can become detached.

In addition, 306 Audi Volkswagen A3 40 TFSIs did not pass the ministry standard for tire deflation warnings, according to the ministry. The automaker will be fined.

If a vehicle owner has already paid money to fix the defects found by the ministry, he or she can ask the automaker to compensate them for their costs, authorities said.