[Weekender] Bracing for summer heat in times of COVID-19 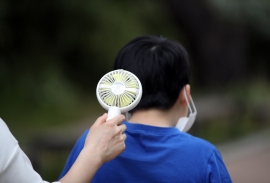 Meteorologists around the globe forecast this summer will be the hottest in decades and South Korea is no exception. As a result, the summer kits and plans of Koreans are already changing.

To stem the spread of COVID-19, wearing face masks has become a part of “manners,” but people have started to complain about wearing them during the hot and humid summer season. Some people instead chose to buy masks made with mesh, cool fiber materials or artificial silk to stay cooler.

Demand for summer face masks has surged 865.3 percent from a month earlier, according to the latest data from the nation’s e-commerce platform operator WeMakePrice. Following the increased demand, the average price of a dental mask also rose from 578 won ($0.47) to 1,996 won, the data showed.

“Competition over summer masks is not yet tough like when we bought KF94 masks earlier this year, but the thinner masks have surely become more expensive than before. I had to secure about 300 dental masks in advance,” said Kim Young-jin, a 33-year-old who has prepared summer masks for his family members.

New types or modified versions of air conditioners are drawing attention in fear of the cooling system causing more infections indoors. Window air conditioners, which can be installed by users without contacting installation engineers, are one of the most popular summer electronic products, according to industry sources.

Wearing summer masks while using air conditioners is the first step, according to medical experts.

Dental masks don’t filter small particles as well as KF94 masks, but they can function similarly to KF80 masks when people fit them tightly over their noses and chins, said Chun Eun-mi, a professor at Ewha University Medical Center’s Respiratory Center.

Since dental masks are not as effective as KF94 masks, Chun urged people to put on facial masks properly and not to take them off, especially if wearing them for long periods in enclosed spaces. She also recommended wearing KF94 masks, if possible.

When it comes to using air conditioners or air circulators, it is necessary to open windows to ventilate the space. No matter where the cooling electronic products are located, their function is to cool the air, which then naturally sinks. Any virus-bearing particles they draw in get re-emitted in cooler air, which sinks back down to where the occupants of the room are.

“If you really need to turn on air-conditioning devices, I recommend turning them on during the afternoon between noon to 2 p.m. and open windows as much as possible. The cooling efficiency may reduce that way, but it can create a safer environment.” 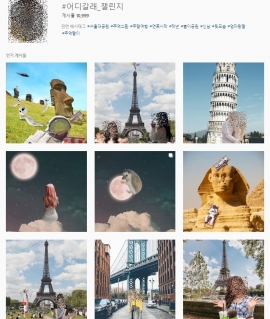 Despite lingering dangers, it is difficult to resist the desire to soak up the sun in summer. But there are alternatives.

While some people chose to spend their vacations in nearby areas, there are others who decide to relax and home to watch videos on YouTube or play on mobile applications. Video clips uploaded on the content-sharing platform take viewers on virtual trips to places around the world.

As of 9:37 a.m. on Thursday, 403 people were accessing on “EarthCam” channel on YouTube to watch Times Square in New York city in real-time. At the same time, 222 people were on “Tokyo Live Camera” to watch views of the city. They chatted and greeted each other, saying they are from Germany, Brazil, Poland and Croatia.

Along with the online indirect travel, an exotic challenge on social media service called “Where do you wanna go?” is going viral and it is expected to give vicarious satisfaction for people who like traveling but wish to stay at home during the outbreak.

Snow, the mobile camera app created by Snow Corp., a subsidiary of Naver, allows users to edit their pictures and combines them with any tourist attractions as backgrounds. Beginning April, the number of Instagram posts with hashtags of #wheredoyouwannago_challenge in English and Korean reached about 14,000, as of Thursday.

Psychological experts attributed the virtual traveling trends to people’s craving for substitutes for the satisfaction of going outside and travel somewhere new amid the limited travel during the pandemic.

Kwak Keum-joo, a professor of psychology at Seoul National University, said people’s eagerness to escape their normal lives and relieve stress has emerged as a new social trend. Companies are also eyeing on creating more traveling content by utilizing the instinct.

“Many (people) have chosen traveling as a way to reduce stress, but since they can’t really go anywhere, their lives have become boring. Some have found the virtual trips as solutions instead, but I believe that connection among the large group of people sharing the trend in the difficult time together helps them feel better, rather than the virtual content itself.”

Despite hopes for an end to the epidemic, overseas travel is still perceived as something to be avoided for the sake of personal and public health.

According to the World Tourism Organization, COVID-19 led to a 22 percent fall in international tourist arrivals during the first quarter this year, compared with a year ago. The annual figure is forecast to decline between 60 percent and 80 percent, it added.

The number of overseas Korean travelers marked about 3.7 million in the January-March period this year -- down 4.16 million, or 52.91 percent on-year and 3.73 million, or 50.16 percent from the same period in 2018 -- according to data from Tourism Knowledge and Information System.