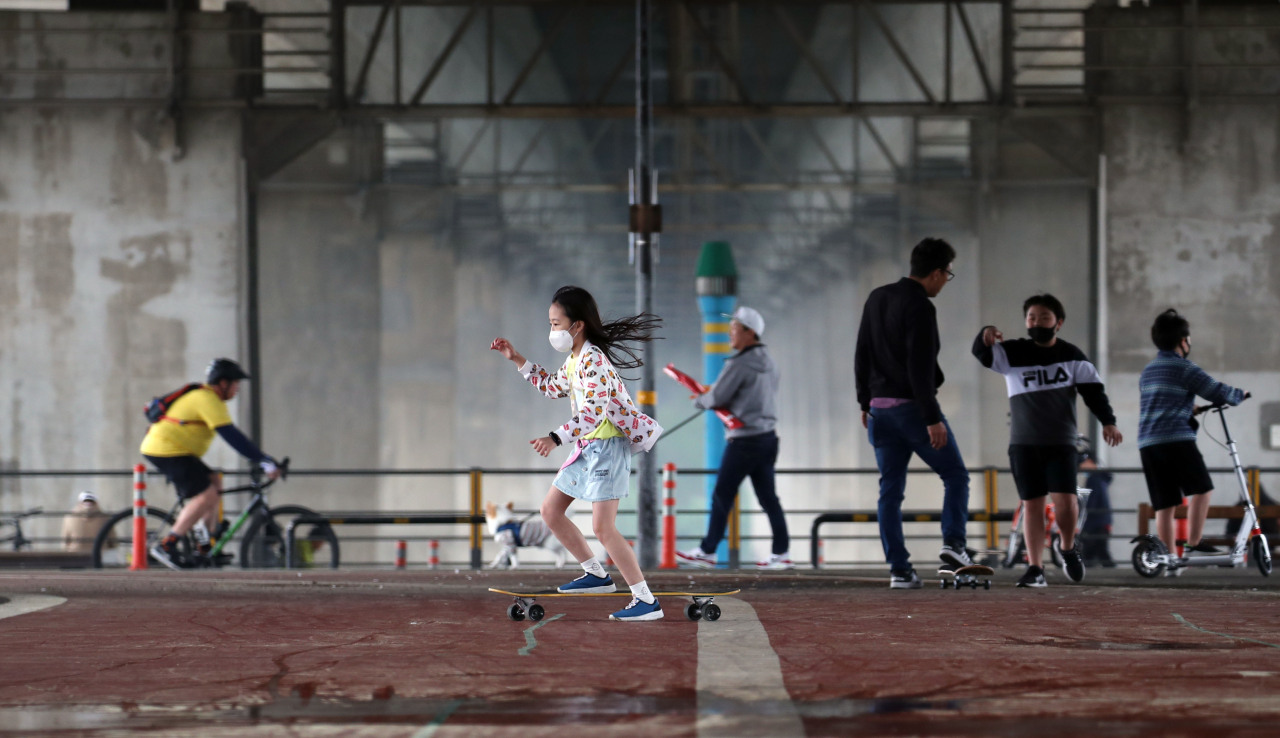 Children wear face masks at a riverside park in Yeouido, central Seoul. (Yonhap)
South Korea’s coronavirus exit is mired in limbo as easing of physical distancing has backfired with a rebound in novel coronavirus cases. The new flare-up of infections linked to Seoul’s nightlife district of Itaewon is now traced in over 10 cities all across the country with the total reaching 133 as of Thursday.

The stabilizing virus trend in the weeks leading up to the holiday weekend falling April 30 to May 5 likely emboldened public confidence in disease control, authorities suggest, causing complacency with distancing requirements to set in. Over the long weekend, as many as 7,000 are believed to have crossed paths with infected individuals at the nightspots in question, according to Korea Centers for Disease Control and Prevention.

Prime Minister Chung Sye-kyun said in a meeting with health officials on Saturday that, if worse comes to worst, the cluster in Itaewon could lead to a reversal of relaxation of the restrictions.

Chung, announcing the decision to reopen on May 3, had said the shift in strategy came as “the socioeconomic costs of a prolonging outbreak were deemed unsustainable.”

“Victory over the coronavirus is fleeting in the absence of cures and vaccines,” he said in a phone interview.

Kim, who had been a key player in Korea’s response to past outbreaks including the Middle East respiratory syndrome and H1N1, said the lifting of restrictions should have been “gradual and phased, as opposed to what it had been -- instant.”

“No one is saying we should stay locked inside forever. But exit from the control measures should have come in phases, with venues carrying low risk opening up first and those with higher risk later,” he said. “Nonessential establishments carrying high contagion risk such as nightclubs would be last to open, for instance.”

He said the reopening guidance was “riddled with ambiguities,” failing to live up to its purpose of “informing citizens on how to navigate their daily lives while dodging risks of infection.” Its extensive length of 68 pages also hurt accessibility.

Pulmonologist Dr. Yum Ho-kee of Inje University Seoul Paik Hospital said the guidance left too much of the safety steps up to individual decisions and interpretations to induce adherence.

“Tell restaurants they can only serve limited number of people depending on the size of the venue, for example, instead of saying ‘keep the tables arms-length apart,’” he said. “Giving specific directions can help elicit better compliance.”

Yum said all projections of confidence at this point warranted wariness.

“An alarm goes off in my head every time someone speaks confidently about the coronavirus,” he said. “This is a nascent virus that we still don’t know much of.”

If there was something that could be forecast with certainty it would be that a second wave was coming our way, he said, which the nation’s top medical experts including those at the KCDC have repeatedly warned of.

“The next wave could be worse than the first, or it could come in multitudes of separate, smaller outbreaks,” Yum said.

Former KCDC Director and pulmonologist Dr. Jung Ki-suck expressed concerns over the disease control agency being sidelined in shaping the virus response and having to fight political pressure.

Speaking about instances of the KCDC’s warnings being contradicted by the rest of the government, he said, “Politicians ought to be listening to science, now more than ever, and not brush aside expert advice if it’s inconvenient to their agenda.”

Amid the struggle to balance coronavirus and economy, conflicting messages from the disease control agency and the rest of the government spurred public confusion, according to public health risk communications expert and preventive medicine specialist Dr. Choi Jae-wook.

In a recent example, while the KCDC has urged against dine-in services, President Moon Jae-in has recommended the opposite, citing damage to small businesses.

Moon, after dining with his aides at a local restaurant, said that he hoped “more would start dining out again” on May 1 when the daily virus numbers remained low. But the president’s encouragement for reopening came as KCDC experts said they were still debating whether to lift restrictions the following week.

“Such inconsistencies in public messaging during a crisis will come at a terrible price,” Choi said.