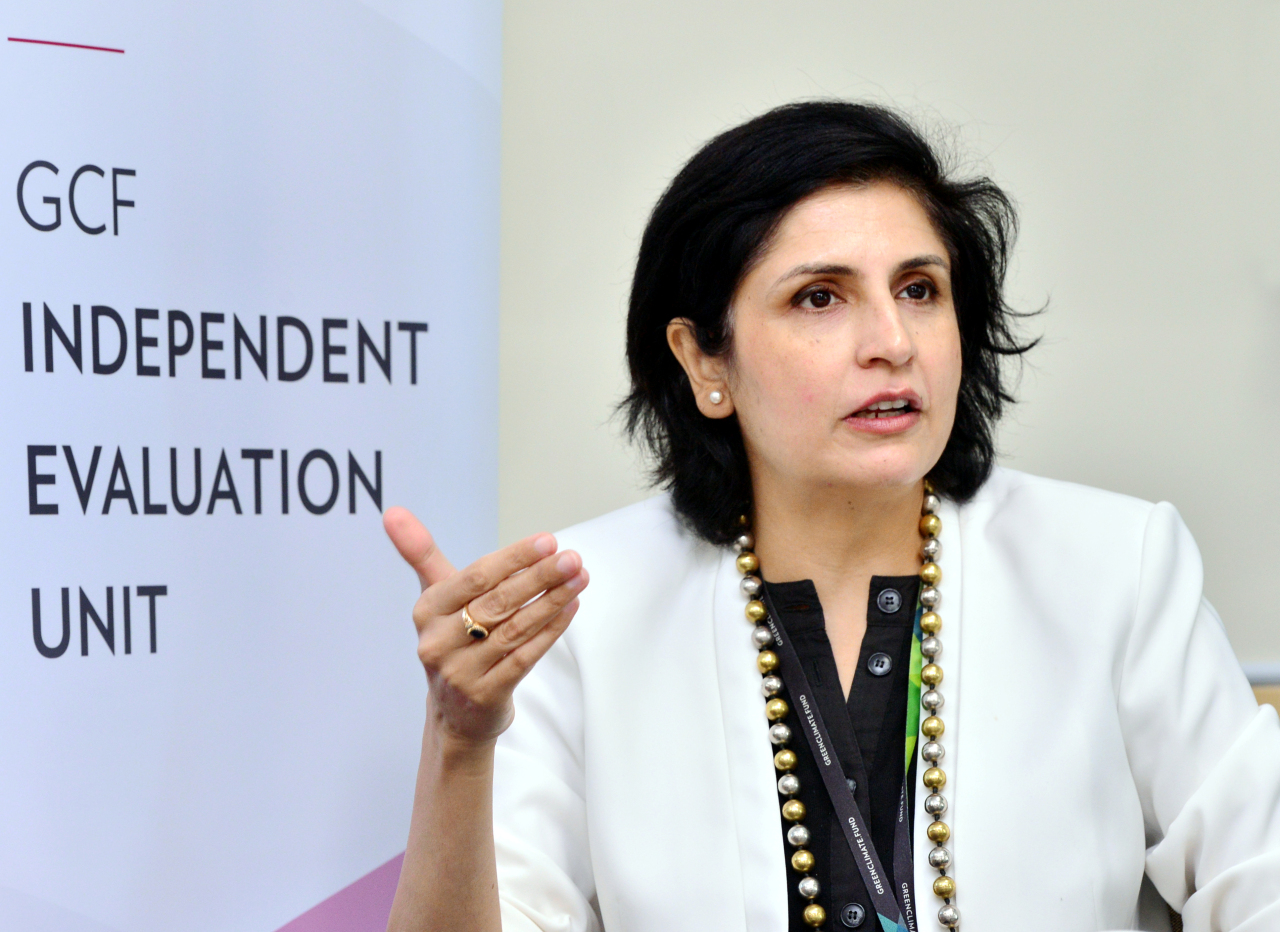 Jyotsna Puri, head of the Green Climate Fund’s Independent Evaluation Unit (Park Hyun-koo/The Korea Herald)
In the climate finance world, money goes not only to the countries most vulnerable to the impacts of climate change, but also to innovative, eco-friendly infrastructure projects that help the world reduce greenhouse gas emissions.

Striking the balance between the two themes -- adaptation and mitigation -- is one of the primary missions of the Green Climate Fund, the world’s largest fund dedicated to helping developing countries take climate actions. The fund serving the Paris Agreement on climate change as well as the UN Framework Convention on Climate Change is headquartered in Songdo, west of Seoul and has raised a combined $20.1 billion in pledges from member countries.

Of the $5 billion the fund invested until 2019, 37 percent went to “adaptation” projects designed to help developing countries, including the least developed countries and small island developing states, in coping with climate change.

But the operating entity of the financial mechanism of the UNFCCC is seeking more active participation by non-state entities to increase support in co-financing projects in developing countries, said Jyotsna Puri, head of GCF’s Independent Evaluation Unit, in a recent interview with The Korea Herald.

“We are asking ourselves how the GCF can show leadership in bringing the private sector into the adaptation space. This was one of the key things we raised in the review of the fund’s performance in the first forward-looking performance review,” said Puri.

More funding for climate change adaptation means many countries in dire need of financial support will be able to build resilience to rising sea levels for example as well as to overall climate variability and uncertainty, she added.

“Private investors can work with international organizations to leverage or invest in such projects by co-financing them. That is a way to increase investment in the climate change adaptation space.”

The theme of adaption distinguishes itself from the mitigation theme, which helps countries -- both developed and developing -- introduce new and renewable energy sources, develop low-emission transport such as electric bus transit and vehicles, and build green buildings or green cities.

Co-financing with the private sector has been far more prominent at the GCF with mitigation projects, showed the IEU’s FPR published in June 2019. This is partly attributed to the lack of private sector investment in adaptation, the report added.

According to the GCF that has received pledges from 45 countries, three regional governments in Belgium and the city of Paris, the volume of co-financing it attracted totaled $12.9 billion as of February 2019.

While adaptation projects are considered less liquid and less marketable compared to investment in mitigation, there is still room for private investors to find adaptation attractive, and this is the space where GCF and other climate funds can exercise more leadership, according to Puri.

“The GCF can show leadership by advocating for global standards in ESG bonds that also consider climate mitigation but also by putting out additional instruments such as resilience bonds and climate bonds,” Puri said.

“The GCF has the potential to be at the forefront of thinking about policies that can make the world far more climate resilient and that are more climate ‘positive.’”

Korean private sector investors could be ones to join in the co-financing climate deals, she added, as they are becoming more ESG-aware.

She also noted that some investment deals in small island developing states can be both mitigation and adaptation.

For example, if a remote island adopts renewable energy production facilities, it would reduce greenhouse gas emission and at the same time reduce the need for coal or gasoline. Accordingly, those remote islands will be likely to free up resources so that island states can spend more on food, clean water and better health services and consequently become more climate resilient.

“Our new and ongoing evaluation will review how the GCF can be ready to take on the challenge of making small island developing states more climate-resilient.”

The Independent Evaluation Unit is evaluating how the GCF’s investments are dealing with the topic of adaptation, and also on GCF-led funding and its relevance to small island developing states, as well as its efficiency and effectiveness.

“The IEU advises the board on the strategy for GCF,” she said. “What it leads to is a very good process of dialogue, asking more questions, creating this learning space in the overall GCF ecosystem.”

When asked about the benefits from working in Songdo, a business district in Korea’s port city Incheon, Puri said her 27-strong team was able to collaborate with local universities such as Seoul National University, Hanyang University and Incheon National University. Puri said the collaboration allowed IEU to improve the efficiency of workflow, by taking advantage of their artificial intelligence technology and bringing behavioral science insights to investment.

The power of responsible investing will become more visible in the eye of investors in the era of the coronavirus pandemic.

“As we all globally are thinking about rebuilding and rethinking policies now in the context of the coronavirus crisis, taxation policies and economic policies may be rethought,” she said.

“Overall we should think of redesigned development pathways where the emphasis is to make people more resilient. Countries should be thinking about how to rebuild the world, using these principles of environmental and social governance and impact investing.”