How to speak, look better for video meetings 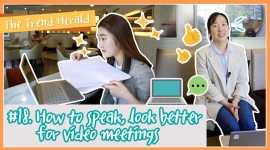 Although the number of new COVID-19 infections has decreased sharply in South Korea, fears of a resurgence persist.

As the coronavirus crisis has gripped the country for more than three months, life as we know it has changed. The prevalence of video meetings and interviews is one of the changes that seem likely to stay even as the pandemic situation subsides.

The Busan branch of the Korean Federation for Environmental Movement conducted its first-ever online conference on Saturday with 100 citizens in Busan to discuss recommendations it was planning to submit to Busan Metropolitan City.

“Online meetings have advantages. They shorten 10 kilometers to 10 centimeters,” Noh Ju-hyung, an activist with the environmental group told The Korea Herald. “We are planning to do another online meeting with the citizens in June as a follow-up meeting.”

Holding a videoconference is definitely convenient, but only when you have become familiar with the system.

President of Enable Communications Choi Mi-young notes that people easily forget about the microphone, which is essential to delivering clear sound during a video meeting.

“I suggest not relying on the embedded microphone system in your laptop, as you may not be heard clearly by your counterparts,” Choi said. “And although you appear on a screen, your gestures will not be read well by the other participants because the image quality may not be as good as you expect.

“So just imagine that you’re talking on the phone and speak slower than usual to convey a clear message. This will help you have better a video meeting,” she said. 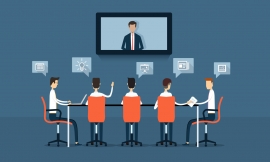 With remote working increasingly becoming the modus operandi as governments around the world impose social distancing to check the spread of the highly contagious disease, some people feel they do not need to worry about what they wear for online meetings.

A 35-year-old surnamed Lee, who works in the automobile industry, says online conferences have become frequent at his company as viral infections in dealerships can lead to the business shutting down. And he is confused as to whether he has to dress up for the video meetings.

“Sometimes we hold multinational online meetings using Microsoft Teams, Adobe Connect and even KakaoTalk,” Lee said. “Most of time I wear a shirt and a jacket. But, to be honest, I do not care about pants as they do not appear on the screen.”

However, experts advise dressing up fully because it has a psychological effect, creating a working mindset.

“If you wear sweatpants or pajama bottoms, you can unwittingly sit too comfortably, and that way you could ruin your posture,” said Nam Chae-min, founder of Chaemin Your Own Image, an image consulting company based in Seoul. “This may ultimately affect how you speak to business counterparts.”

Nam also advised to watch for the “forward head posture” that many office workers commonly have as they spend hours looking at a computer screen.

“When you sit in front of a computer for an important video meeting such as a job interview, you could stick out your head unconsciously, making you look less professional. So make sure to sit upright with your ears directly over your shoulders.”

When it comes to makeup, Kim Young-rae, a makeup artist and training manager at Guerlain in Seoul, advises emphasizing the eyebrows regardless of gender if one wants to look more professional and vivid at online meetings.

“Eyebrows are like the roof of your face, which are key to giving a good snap image to counterparts,” Kim said. “So I recommend you trim or emphasize eyebrows with an eyebrow pencil.

“Eye shadow and powder blushers do not show up on video as much as you might expect. I recommend you pay more attention to base makeup, such as foundation and CC cream, instead.”