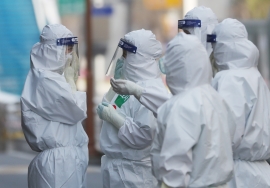 More new cases were reported in the Seoul metropolitan area than rest of the country.

Twenty-three of the new cases were found among recent arrivals, accounting for 58 percent of newly confirmed cases. Ten of those were detected at the border, and the remaining 13 after they entered the country.

Thursday marks the first time since Feb. 20 the number of new cases has dropped below 40.

A total of 197 people have been released, making the number those discharged from the hospital after full recoveries at 6,973. Four more people died, with the death toll reaching 204.