[Serendipity] This time, get it right on sex crimes 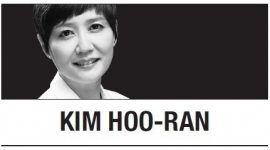 Reading the news on secret chat rooms on Telegram where videos of sexual exploitation were traded feels like wading through filth. So much so, I consciously stayed away from it as much as possible until Wednesday, when it was no longer possible.

Leaving Jongno Police Station in Seoul on Wednesday, Cho Ju-bin stood in front of a photo line for the press. Without a mask or cap to cover his face, there stood the 24-year-old man who is alleged to have blackmailed dozens of women and minors into filming degrading sex acts, and then posted trailer clips in a secret chat room on Telegram where paying members seeking sexually exploitative videos gathered.

Investigators found Cho had volunteered at a number of nongovernmental organizations, including those working with the disabled and children. People who worked with him did not notice anything peculiar about Cho. Why he chose to volunteer at those places needs to be looked into, but I can only imagine the shock and horror of people who interacted with him.

It has also been revealed that Cho had blackmailed a number of prominent figures, extorting money. Among the victims is the president of local broadcaster JTBC, a freelance journalist and a former Gwangju mayor. Police also found some 130 million won ($106,000) in cash at Cho’s home and suspect he may have stashed away more, judging from the cryptocurrency wallet tied to his secret chat room.

Some women’s groups claim that more than 260,000 people have used some 60 Telegram chat rooms where videos of sexual exploitation are traded. Police said Cho’s chat room members could have paid as much as 1.5 million won each in cryptocurrency to join the room.

The public wrath over what has come to be known as the “Nth room” case is palpable. President Moon Jae-in has ordered a thorough investigation and strict punishment for all those involved, including those who viewed the videos. Ministries, lawmakers, police, prosecutors and civic groups are united in calling for zero lenience for perpetrators of the egregious crime.

Cho is but one of the many who have profiteered by pandering to human depravity and exploiting the already vulnerable. For years now, the public and various civic groups have called for the legislation of stricter penalties for sex crimes and their stringent enforcement. They argue that the lenient sentences given to sex criminals in Korea encourage perpetrators to continue undeterred.

This is how lax Korea has been in punishing sex criminals. Only last November, a man identified by the surnmae Shin appealed the one-year sentence given for producing and distributing child pornography through a secret chat room on Telegram, arguing the penalty was too heavy. The prosecutors, who had sought a two-year jail sentence, did not appeal. It was only after the public became outraged over the “Nth room” case that prosecutors on Wednesday requested the second sentencing, scheduled for Friday, be postponed.

The prosecutor’s reasoning for not appealing sounds flimsy. It said that at the time of the indictment, there was no material to prove the connection between Shin’s case and the “Nth room.”

Shin was indicted on charges of possessing 91,890 articles of child pornography and selling 2,590 of them via the Telegram chat room, making an illegal profit of some 25 million won. In the first trial Shin was sentenced to one year in prison and 40 hours of a sexual violence treatment program. He was also banned from working at facilities and organizations related to children and minors for three years. Most of the money he made was confiscated.

Shin had taken over the chat room from a user with the alias “GodGod,” who is still at large. It is unknown how many operators of similar chat rooms there are.

Clearly there is room for improvement. If authorities fail to deal strictly with this case and the cases that will be uncovered as the investigations continue, they will be guilty of allowing heinous human rights abuses to proliferate by the dint of their inaction.

--
The writer is a culture desk editor at The Korea Herald. -- Ed.