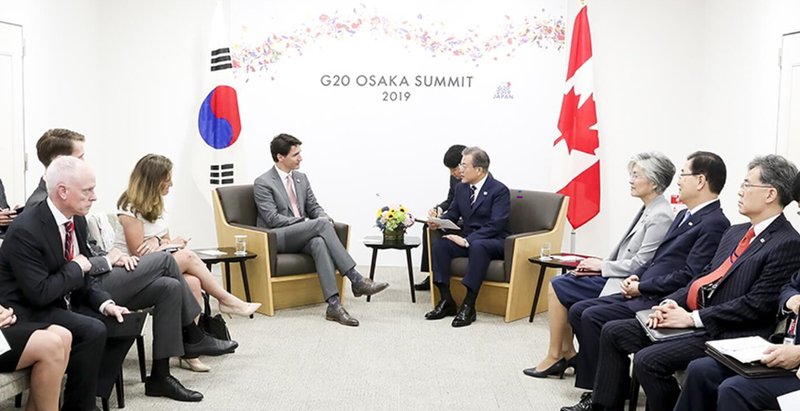 (Ministry of Foreign Affairs)
Canadian Prime Minister Justin Trudeau said Thursday his country plans to take a cue from South Korea in responding to the new coronavirus, holding phone talks with President Moon Jae-in for half an hour, according to Cheong Wa Dae.

Trudeau lauded South Korea for its "science-based" handling of the problem without excessive burden on the medical system and for producing accomplishments in protecting the people's safety, Cheong Wa Dae spokesman Kang Min-seok said. The prime minister also said South Korea is taking advantage of its experience from the MERS incident in 2015.

Canada plans to follow a model similar to South Korea's steps, he was quoted as adding, pointing out that its "extensive, speedy" testing and tracing have been very important in the success.

He again said Canada would like to learn from South Korea over the virus response, Kang said in a press release.

Moon briefed Trudeau in detail on his administration's quarantine measures and said it's willing to share relevant experience and clinical data with the international community.

The prime minister replied that it would offer a lot of lessons and expressed hope for dialogue between health authorities of the two nations.

He supported South Korea's limited entry ban on people from China and other countries, describing it as the "right decision," while saying Canada had no other choice but to close its border with the United States.

Meanwhile, Moon expressed hope that the prime minister's wife, reported to have contracted the virus, would recover her health at an early date.

Trudeau said she has been cured almost completely.

Their phone talks came hours ahead of the G-20 emergency video summit on a coordinated global response to the issue.

Both Moon and Trudeau are scheduled to join the G-20 session that begins at 9 p.m. (Seoul time).

It was the latest in Moon's summit diplomacy conducted via phone as part of the response to the virus.

Earlier this month, he talked with US President Donald Trump and the leaders of France, Sweden, Spain and Saudi Arabia. (Yonhap)