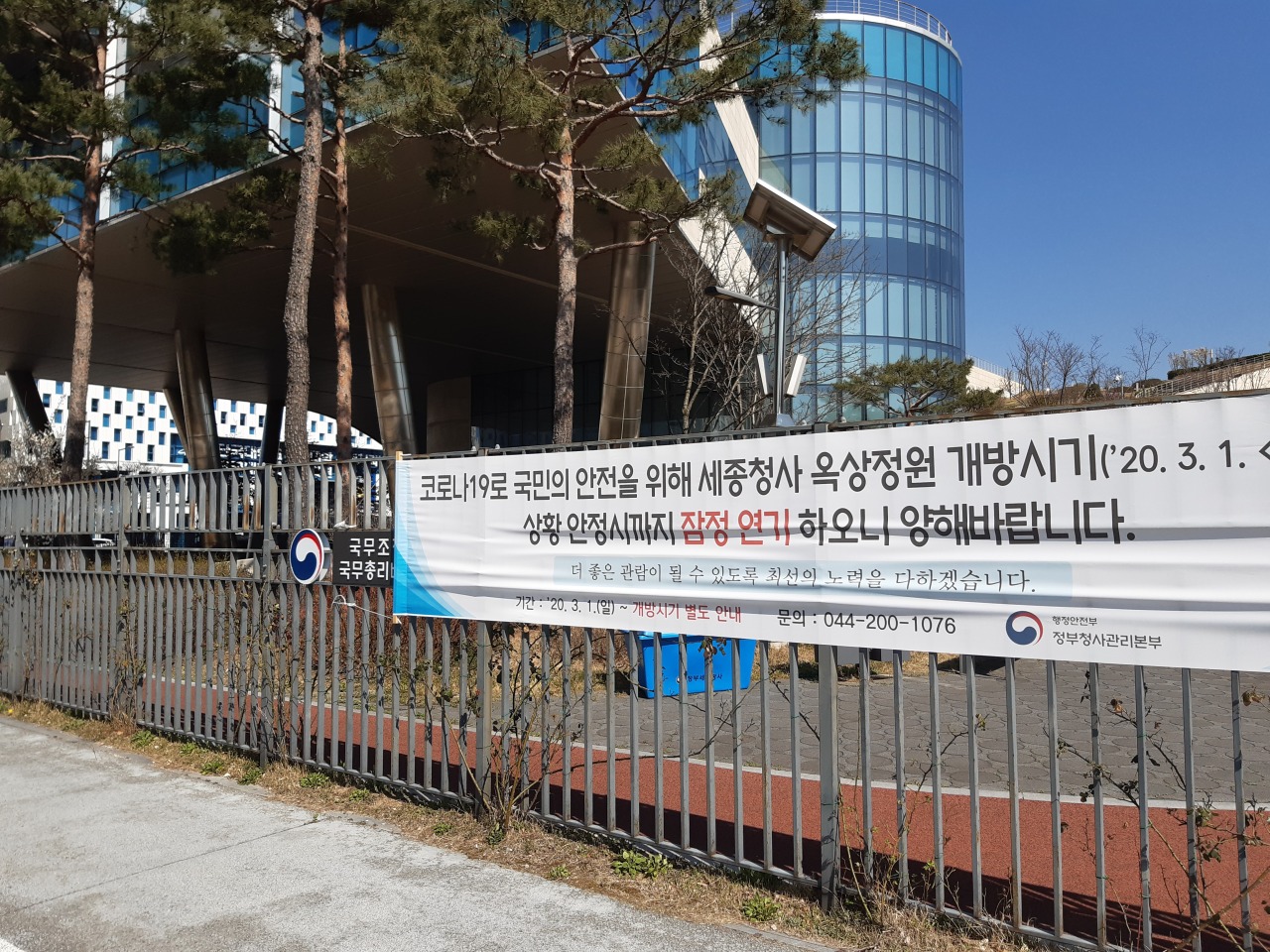 A placard at Government Complex Sejong informs visitors of the closure of roof-top garden as of Sunday, which links buildings from No. 1 to No. 15 in a curved row, for an indefinite period starting from March 1 in the wake of COVID-19. (The Korea Herald)
SEJONG -- Foreigners’ aggressive net-seller position on the local market has not yet subsided as of the fourth week of March.

Over the past 16 trading sessions between March 5-26, foreign corporate investors net sold local stocks worth 10.7 trillion won ($8.69 billion), which are listed on the main bourse. Their divesting has continued for the 16th consecutive session since March 5.

Their selling spree, which is attributed to fast spreading COVID-19 worldwide as well as the epidemic’s still ferocious situation in South Korea, made the benchmark index plummet to 1,482.46 on March 23, losing more than 600 points compared to 2,085.26 on March 5.

Though it has advanced to the 1,600-1,700 level (1,686.24 as of March 26), some research analysts say that it is hard to assess whether the index has hit rock bottom amid the ongoing uncertainty over the novel coronavirus.

While the contagion pace has seemingly slowed in South Korea and China, the number of confirmed cases and deaths are rapidly growing in the US and Europe. The virus is also expanding in South and Central America, Oceania and Africa.

A capital market insider in Seoul said this is “not similar” to the equity market situations during the Brexit referendum in 2016, the MERS virus in 2015 and the Sept. 11 terrorist attacks in 2001.

“The current market may be likened to the 2008 global financial crisis or the 1997 Asian currency crisis. But the COVID-19 case is the matter of global operation of workforce and factories as well as international movement of travelers -- not just money,” he said. 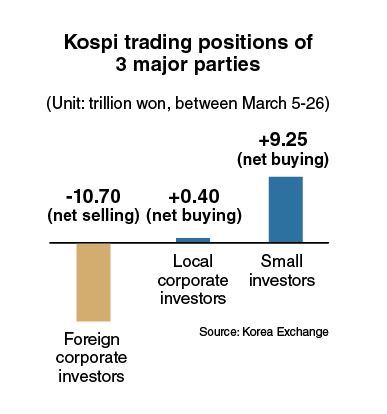 (Graphic by Kim Sun-young/The Korea Herald)
In this context, he questioned the efficacy of the state-led emergency funding to bourses, saying that “the funds could possibly carry out the (undesirable) function of absorbing another series of share-offloading by foreigners.”

The skepticism over equity prices is also growing in terms of the fact that recent bounce-back is mainly due to the heavy purchases of small investors (mostly Koreans), who net bought stocks worth 9.25 trillion won over the corresponding 16 trading sessions.

“While small investors have actively been raking in stocks such as Samsung Electronics and SK hynix, it is doubtful when it comes to their showdown versus foreigners -- at least on a midterm basis, in the coming weeks or months,” said an economist.

Many online commenters share the view that it is worrisome that more and more young individuals in their 20s and early 30s are rushing to the stock market for short-term gains.

Some likened the situation to the Bitcoin fever among those in their 20s in 2017, or to the fever of Seoul apartment purchase of those in their 30s via mortgages in 2019.

While local analysts have mixed predictions, some commenters on stock-investment bulletin boards have forecast that the Kospi would further drop to around 1,000 points. One wrote that he would “start buying when the index touches the 1,200 level. The entry timing is not yet right.”

A commenter said that small investors had often been successful in buying shares at the lowest prices, adding, “But they ultimately lost or gained small because they used to move inversely to foreigners.”

But some commenters refuted the theory, saying that it was “debt-saddled” small investors that had been placed on a prey of foreign and local corporate investors, as they purchased stocks via a deferred cash payment or a credit-based buying beyond their cash deposited at accounts, which is dubbed the “leverage.”

The two sort of trading methods incur huge losses when the index plunges, as investors face compulsory selling (automatic sell orders) regardless of their will when they fail to meet payment due (within two more sessions from their unpaid-buying dates) or the minimum ratio (140 percent) of the market value of credit-based stocks to the borrowed money, set by brokerage firms.

So the unpaid-based “brave” traders are frequently the target of short sellers -- particularly in this kind of bearish situation, hit by shocks.

“Even if the prices nose-dived, there would be little reason for wealthy individuals with residual cash to dispose of their immediate cash payment-based stocks in a haste. Those in need of urgent money -- like credit card payment dues -- are always victimized in the market,” said an official of the Financial Supervisory Service.