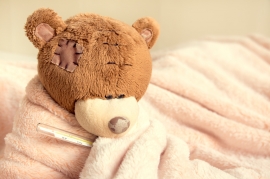 Most kids who catch COVID-19 will fare better than adults and get mildly sick, new findings suggest, but not all will be spared from falling severely ill.

Korea Centers for Disease Control and Prevention’s Tuesday data show the number of patients under 10 here stood at 105, accounting for 1.15 percent of the total 9,137 cases, and those under 20 stood at 475, or 5.2 percent.

“No one under 20 is having severe or critical symptoms in Korea,” pediatric infectious disease specialist Dr. Eun Byung-wook of Seoul’s Nowon Eulji University Hospital said in a phone interview.

“But this is not to say that children and adolescents are not capable of developing a serious illness. It can happen in very exceptional circumstances, especially for late teens in whom the infection can trigger an immune reaction known as ‘cytokine storm,’” he said.

Cytokine storm is an extreme immune response that causes the body to attack and damage healthy tissues, Eun explained.

Dr. Choi Eun-hwa, vice president of the Korean Society of Pediatric Infectious Diseases, told The Korea Herald that it was hard to comment on severe or deadly cases of pediatric infections due to insufficient data, but that juvenile COVID-19 cases here have been “very mild.”

Children in Korea have not been as severely affected by the disease, so far. But instances of young patients getting gravely ill are starting to surface in other parts of the world.

The Los Angeles County Department of Public Health confirmed the death of an 18-year-old on Tuesday, which the department has said required evaluation by the US CDC for a possible alternate explanation.

Children of all ages are susceptible to the disease, according to a recent study from China, with younger children -- infants in particular -- at a higher risk.

The study, published on March 16 in the journal Pediatrics, looked into 2,143 pediatric cases reported to China’s CDC between Jan. 16 and Feb. 8.

The study said 4.4 percent of children with COVID-19 were diagnosed as asymptomatic, 50.9 percent as mild and 38.8 percent as moderate, together making up 94.1 percent of all cases.

There were no significant differences between boys and girls.

In a Tuesday briefing, senior Health Ministry official Yoon Tae-ho told reporters that government measures regarding minors in the COVID-19 crisis came in two parts: Protecting them as vulnerable populations and preventing them from becoming a source of spread.

He added that the safety of starting a new school term, the date of which has been twice postponed to April 3, has yet to be evaluated.

“The government will be watching closely the cases both here and abroad to determine whether it is safe to send our children to school,” he said.