S. Korea to expand two-week quarantine to arrivals from US

South Korea will impose a 14-day self-quarantine on citizens and foreigners with long-term stay visas arriving from the United States starting Friday, as part of its efforts to contain a rising number of imported infections.

The country reported 100 new novel coronavirus cases Wednesday, bringing the total infections to 9,137. The death toll rose by six to 126, according to the Korea Centers for Disease Control and Prevention.

Of the 51 new cases -- 43 Korean citizens and eight foreign nationals -- involved travelers arriving in Korea from abroad. Of the cases, 29 were from Europe, 18 from America (including 13 from the US) and four from Asia.

Stricter quarantine measures will be applied to incoming travelers from the US -- Korean citizens and foreign nationals alike -- starting midnight Friday in the wake of an explosive increase in the number of cases in the country.
Unlike those coming from Europe, however, only those with symptoms will be tested for COVID-19 despite concerns those who are infected with the virus without symptoms can also infect others. About 8 percent of the patients who test positive for the virus show no symptoms at all until they recover, according to health authorities. 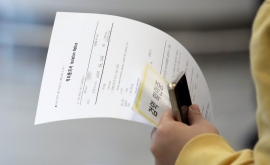 Those with symptoms of COVID-19 infection among travelers coming from the US -- regardless of nationality -- will be transferred to designated facilities for testing and wait there until the results comes back. Those who test positive will be taken to hospitals or quarantine facilities depending on the severity of their symptoms.

Those without symptoms among Korean citizens and foreigners with long-term visas will be required to self-quarantine at their homes for two weeks. Only those developing symptoms will be tested.

Foreigners arriving from the US for a short-term stay will be tested and await the test results at designated facilities. They will be allowed entry only if the results are negative, but they will be required to report their health conditions on a daily basis to the authorities.

“Among those coming from Europe, the proportion of those confirmed to be infected is high, so we are carrying out testing and enforcing self-quarantine (for everyone coming from Europe),” KCDC Director Jung Eun-kyeong said at a briefing.

The authorities said, if necessary depending on how the situation develops, they will expand the mandatory virus testing for all incoming travelers from the US.

The government already began to toughen quarantine measures on arrivals from Europe.

All incoming travelers from Europe are being tested for COVID-19. Those without symptoms -- Koreans and foreigners with long-term visas -- are required to be tested at community health clinics in their neighborhoods within three days upon arrival.

The country receives about 2,500 arrivals from the US and 1,000 from Europe daily. More 80 percent of those arriving in Korea from Europe and the US were Korean citizens in recent days, according to the authorities.

Korea has seen a surge in the number of imported cases this week, with 64 imported cases reported on Monday, 76 on Tuesday and 100 on Wednesday. Of all cases in the country, 227 cases came from abroad, according to the KCDC data.

Those violating self-quarantine rules face a fine of up to 10 million won ($8,120) and imprisonment of up to one year.

Some 82.4 percent of the country’s total cases were linked to clusters of infections, according to the KCDC.

Facilities such as nursing homes, where many people stay close in enclosed places, increases a risk of community spread of the virus, Jung said, announcing the interim result of the epidemiological study into a call center in southwestern Seoul.

A total of 97 people working in the 19-story building, mostly at the call center, tested positive for the virus. On the 11th floor alone, 43.5 percent of those working on the floor were infected with the virus. Some 8 percent of the cases had no symptoms.