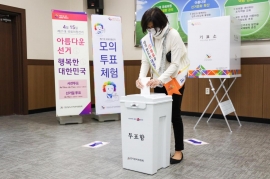 The coronavirus pandemic is expected to disrupt the upcoming April general elections, as its consequences have extended to every corner of the daily lives of voters.

The COVID-19 pandemic has created unprecedented uncertainty on the election, as voters could eschew casting ballots in fear of the risk of contagion in crowded polling places.

Revised election rules adopting a mixed-member proportional representation system, which will be applied to the poll for the first time, gave birth to new satellite parties, but news related to the virus crisis has stolen its thunder.

The National Election Commission virtually scrapped its plan to run an election education program for high school seniors, who became eligible to cast their votes by a new law that lowered the minimum voting age to 18 from 19, to replace it with an online tutorial on YouTube, as schools will remain shuttered until the first week of April.

This year’s candidates almost never had a chance for face-to-face interactions with voters.

Experts expect that voter turnout is likely to be weak as the government decided Sunday to strengthen social distancing, which requires people to keep a distance of 2 meters when interacting with others, expanding the campaign for two weeks to just 10 days before the elections take place.

Political parties are factoring in the potential impact of the epidemic on their supportive age groups’ participation as part of last-ditch efforts to win more seats in the parliament.

The main opposition United Future Party is seeking ways to prevent a drop-off in turnout of its supportive age group – those aged over 60 – as the virus appears to be more dangerous to the elderly.

“Overall, turnout will plunge in the aftermath of COVID-19. Voters aged over 60, in particular, are unlikely to go to the polling station,” politics critic Park Sang-byeong said.

Another factor that may move turnout down is the public’s increasing indifference to politics due to the media‘s nearly sole focus on coverage of virus-related news, he added.

Prime Minister Chung Se-kyun expressed his concerns over possible low voter turnout, urging ministers to inform the public of the government’s measures regarding the pandemic to gain trust from citizens for their safety so they will come to polling stations.

Having the new variation in place, other countries are also dealing with similar situations. France, one of the EU countries worst hit by the novel virus, saw on Sunday a historic low turnout of 45 percent in the first round of its local elections, down 20 percentage points from one held in 2014. In the United States, expanding universal vote-by-mail is emerging as a movement for November‘s general election.

Some 171,000 Koreans living abroad, who have registered to cast their ballots in their host countries, for six days starting April 1 are likely to face a setback for transferring and tallying their votes, as over 170 countries are currently banning or restricting travelers from Korea.

“It is questionable whether ballot boxes can be moved to Korea at this time when operating a flight is not viable (due to restrictions),” United Future Party floor leader Shim Jae-chul said.

For voters here, Korea’s National Election Committee has mapped out plans to ensure their safety, such as taking the temperature of voters as they enter polling places and enforce social distancing of 1 meter while standing in line.

The body also allowed people who have tested positive for COVID-19 to vote by mail from either hospital or home.

The election is likely to make a departure from the conventional thought that liberals see a net gain in votes when turnout is high and conservative movements benefit when turnout is low, experts said.

“Low turnout will present a disadvantage to opposition parties. For them to attract votes, people should join a wave of criticism against the Moon administration, but voters cannot afford to pay attention to anything because of COVID-19,” Park said.

President Moon Jae-in’s approval rating last week rose to the highest level since the beginning of this year.

A weekly poll, released by Realmeter on Monday, reported that 49.3 percent of respondents supported Moon’s conduct of state affairs, while 47.9 percent disapproved.