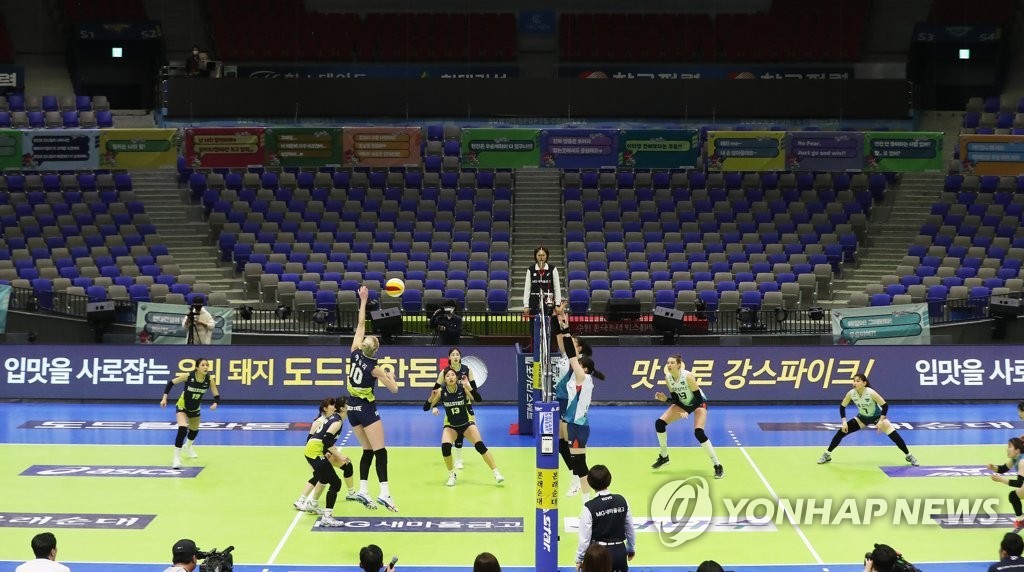 (Yonhap)
The national volleyball governing body has put off deciding the fate of the suspended professional season, amid increasing calls for cancellation in the wake of the coronavirus outbreak.

The Korean Volleyball Federation (KOVO) met with representatives from 13 men‘s and women’s V-League teams on Thursday, and the only agreement that came out of the meetings was that they will meet again soon to reach a conclusion, one way or the other.

The three-plus hours of talks had some team reps demanding cancellation of the season, which would be an unprecedented step in the 15-year-old V-League. Others called for further deliberation on the matter.

All pro leagues in South Korea have pressed pause due to the spread of COVID-19.

The most recent V-League matches were played on March 1. The seven men‘s and six women’s teams played a few games without fans, in an effort to slow the spread of COVID-19, before KOVO shuttered doors altogether.

KOVO had designs on resuming play in late March or early April and putting together a compressed schedule to finish out the regular season. The playoffs would likely be shortened in that scenario, so that the champions would be determined by April 15 at the latest. That‘s the day of parliamentary elections, and many of V-League arenas are scheduled to serve as voting count stations.

But the spread of the virus has shown few, if any, signs of abating -- the number of new cases reached triple digits Thursday, following four consecutive days of staying in double figures -- and KOVO and team reps couldn’t decide whether to forge ahead or wipe out the season.

In the V-League, seven men‘s teams play 36 matches each, and six women’s teams play 30 matches apiece. When the men‘s competition came to a halt, teams had played 31 to 33 matches. The women’s teams had 26 or 27 matches in the books at the time of suspension. In all, there were 14 men‘s and 10 women’s regular season contests remaining.

The K League, the men’s football circuit, hasn‘t even kicked off, after delaying its Feb. 29 start of the new season. There’s no word yet on when the season will start.

The Korea Baseball Organization has pushed its Opening Day from March 28 to sometime in April. The league will meet with club presidents next Tuesday to possibly settle on a return date or at least move closer to doing so. (Yonhap)