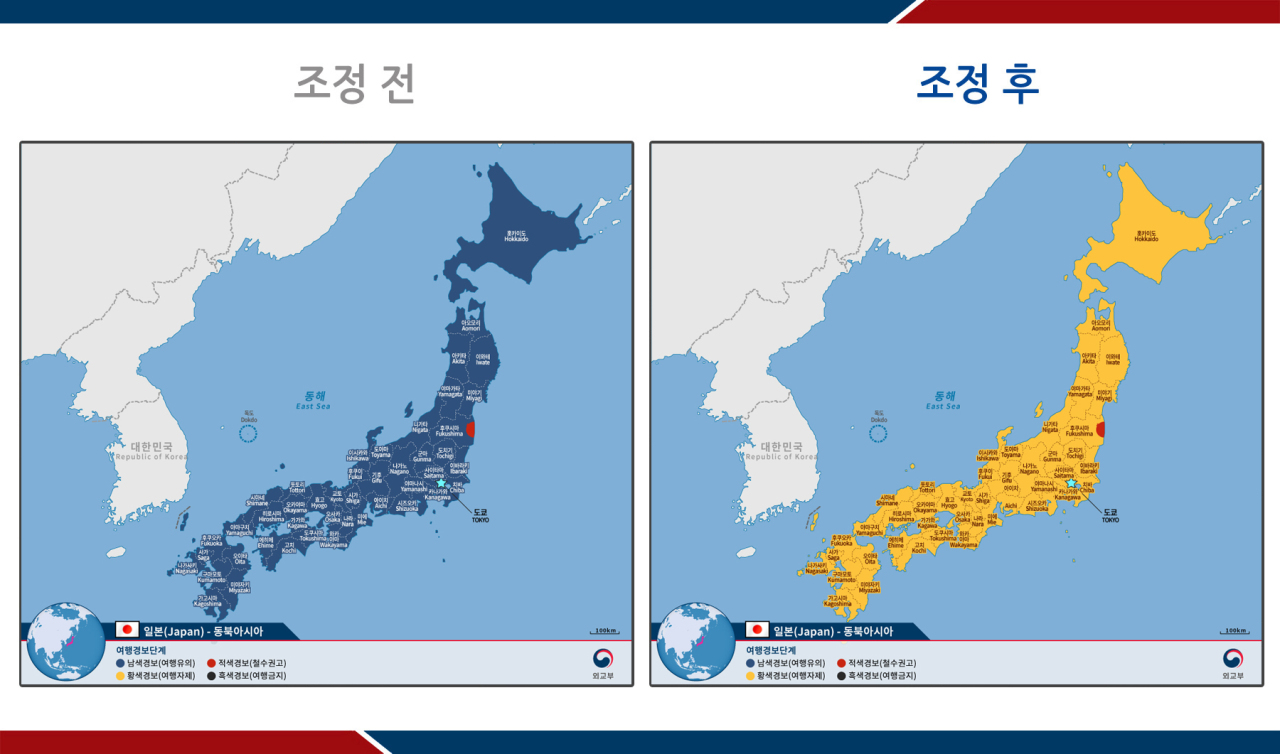 This graphic image, provided by Seoul`s foreign ministry on Saturday, shows a map of Japan marked yellow to indicate new travel warnings. (Ministry of Foreign Affairs)
South Korea’s Foreign Ministry raised the travel alert for all regions of Japan on Saturday, amid growing concerns about the number of COVID-19 cases there.

Effective Monday Seoul advised “restraint,” representing the third level in the country’s four-notch warning system. A week ago it advised “caution,” a warning one notch lower.

The ministry cited growing concerns about the continued spread of the coronavirus in Japan and how it could affect Koreans, saying the international community has expressed doubts about what it calls Japan’s “opaque” reporting and “weak” response to the virus.

“We advise Koreans residing in Japan to take extra precautions and for citizens who are considering traveling to the area to think carefully,” it said.
The ministry said it would continue to monitor the situation closely and review its alert levels accordingly.

The strongest warning level, “recommend withdrawal,” remains in place for the Fukushima region due to 2011 nuclear disaster.

The latest travel warning has been interpreted as a “tit-for-tat” response to Tokyo’s latest travel restrictions against people entering the country from Korea.

Korea announced Friday that it was halting its visa waiver program and invalidating any travel permits already issued to Japanese, starting Monday, in response to Japan’s decision to impose a two-week quarantine on all visitors from Korea and suspend visa-free entry for Koreans.

Both Korea and Japan have been hit hard by the coronavirus, which originated in China late last year. Korea had reported 6,767 confirmed cases and 45 deaths as of Saturday. Japan has seen more than 1,100 cases, including 706 people who were aboard the Diamond Princess cruise ship, which was quarantined near the capital city.