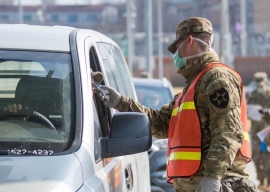 A US soldier conducts a coronavirus temperature screening on a visitor with a thermometer gun at a gate of Camp Casey in Dongducheon. Gyeonggi Province, on Saturday. (Yonhap)

South Korea on Saturday warned a large number of virus cases will be reported in Daegu, the epicenter of virus outbreak here, as the country intensified its anti-virus fight with a massive program of testing on followers of a religious sect in the city.

The country reported a whopping 594 additional cases of the new coronavirus to bring total infections to 2,931. So far, 16 people have died in South Korea from the virus that emerged in China.

Of the 594 new cases, 476 are in Daegu, 300 kilometers southeast of Seoul, and 60 were reported in neighboring North Gyeongsang Province, according to the Korea Centers for Disease Control and Prevention (KCDC).

The number of patients in Daegu, the epicenter of virus outbreak here, surpassed the 2,000 mark, accounting for more than 70 percent of the total cases in South Korea.

The sharp increase in confirmed virus cases in the country's fourth-largest city, which has a population of 2.5 million, came as authorities began intensive tests on followers of the Shincheonji church in Daegu.

Many more confirmed virus cases are expected in the coming days as health authorities have begun testing more than 210,000 Shincheonji followers.

The Daegu city government said earlier the number of virus patients there may exceed 3,000, considering that the church accounts for roughly 80 percent of its confirmed cases so far.

"The proportion of confirmed cases among Shincheonji followers is very high, and over the next few days, the number of new cases in Daegu will run high till virus tests on the church followers are completed," Vice Health Minister Kim Gang-lip said in a daily briefing.

Virus tests on a third of the 9,300 Shincheonjin followers in Daegu has been completed, he said.

"This weekend will be crucial juncture in containing further spread of the new coronavirus," Kim said. "Citizens are urged to stay indoors and avoid mass gatherings such as religious services."

Other major provinces and cities have also reported new virus infections, the latest sign that the potentially deadly virus is spreading rapidly across the country.

Since raising the virus alert level to "red," the highest level, on Sunday, health authorities have focused on halting the spread of the virus in Daegu and North Gyeongsang Province.

As of Saturday morning, South Korea is carrying out tests on 29,154 people nationwide, while 53,608 people have tested negative in total.

The number of patients cured of the disease remained unchanged at 27.
South Korea confirmed its first new coronavirus case in a Chinese woman from Wuhan, the epicenter of the virus outbreak, on Jan. 20. (Yonhap) 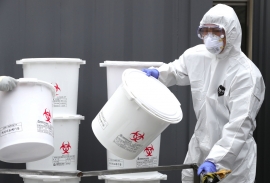