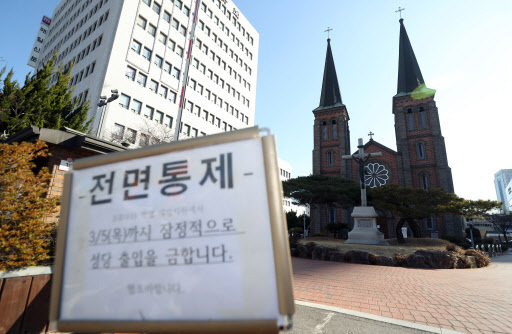 (Yonhap)
Of 76 Koreans who traveled to Israel for religious pilgrimages in February, 18 tested positive for the deadly coronavirus upon returning home, local health authorities said Sunday.

Two groups of Roman Catholic travelers stayed in Israel for about a week each for religious tourism earlier this month, visiting packed religious sites.

Among 39 Koreans from North Gyeongsang Province who visited Israel from Feb. 8-16, 18 have been confirmed positive, including a tour guide residing in Seoul.

A 59-year-old woman who lives in Yecheon County, North Gyeongsang Province, was the first confirmed patient. She was unable to go to work upon arrival due to a high fever and respiratory problems.

Local health authorities are scrambling to narrow down the exact times when the patients could have been infected, leaving open the possibility that a group member may have caught the virus prior to departure or somewhere along the travel route either in Israel or Korea.

Another group of 37 people from Jeju Island traveled to Israel from Feb. 11-21, and one person with a cough was waiting for their test results as of Sunday afternoon.

The presence of COVID-19 in these Korean tourists, as well as the skyrocketing number of confirmed cases here, prompted Israel to bar travelers from Korea from entering the country, the Israeli government said.

As a result, some 130 Koreans who landed in Tel Aviv on Saturday evening, local time, were sent back to Korea after being denied entry.