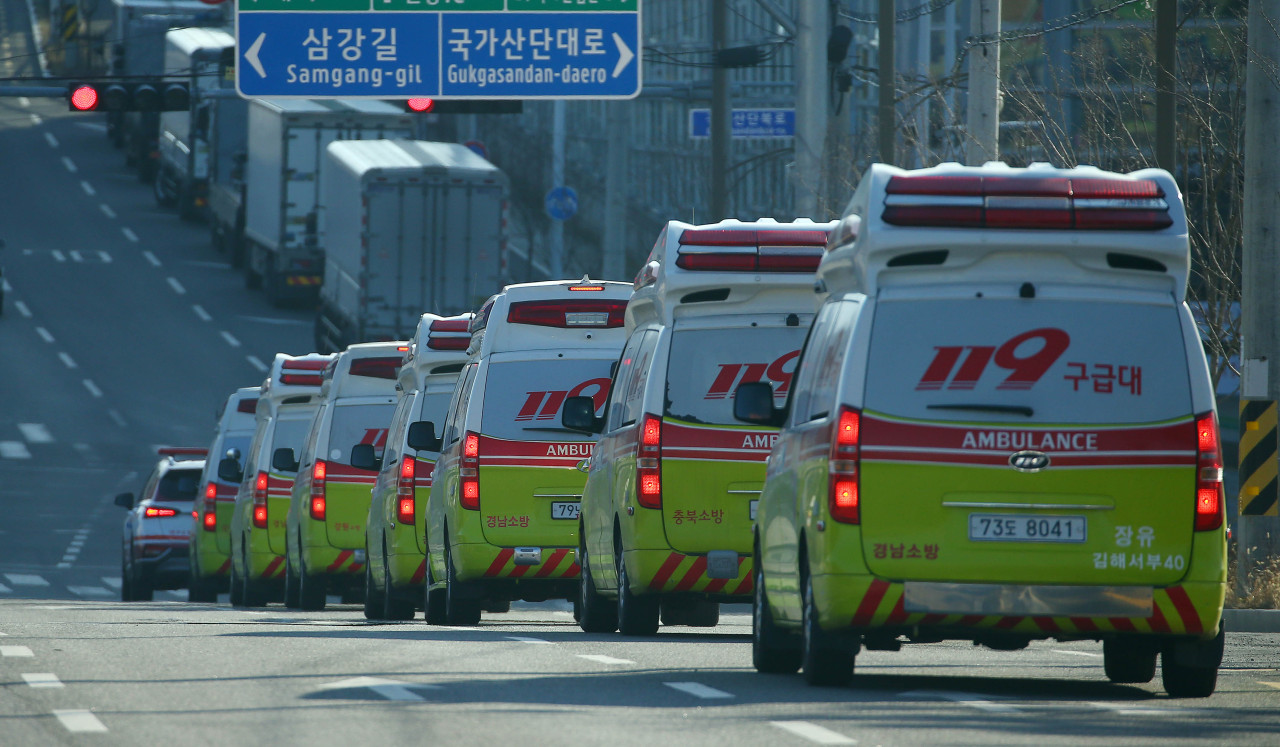 Ambulances line up on a street in Daegu on Sunday on their way to transport patients with the new coronavirus. (Yonhap)
Medical societies said over the weekend the new coronavirus outbreak in South Korea was far from peaking, warning the coming week could see a further escalation after spiking recently.

“Korea is past a point where the government or the Korea Centers for Disease Prevention and Control’s response alone can contain the disease,” said Kim Dong-hyun, president of the Korean Society of Epidemiology and preventive medicine specialist at Hallym Medical School. “Society-wide action is necessary. Everyone is urged to comply with safety rules outlined by health authorities.”

Peck Kyong-ran, an infectious disease specialist at Samsung Medical Center who heads the Korean Society of Infectious Diseases, said the alarming surge in cases with no clear epidemiological links indicates that contracting the disease was possible without having visited high-risk places or met with suspected patients.

“It is with pressing urgency that we ask people to cancel nonessential meetings or gatherings,” she said. “Stay home as much as your situation allows, at least until the rate of incidence starts to slow down.”

During a meeting with reporters Saturday evening in Seocho, southern Seoul, a joint response committee comprising 11 medical groups said the government should raise the virus alert status to the highest level.

For about a month since the first case was reported Jan. 20, virus control measures entailed isolating all patients in negative pressure rooms and tracing their contacts was manageable, the doctors said. These were no longer possible, as the number of cases has soared across the country in the past few days.

“A shift in strategy is called for -- to mitigate rather than contain, because exposure in communities is inevitable at this stage,” said Choi Won-seok, an infectious disease professor at Korea University School of Medicine. The “mitigation” approach is aimed at delaying the outbreak’s progression so that officials and health workers can pace their response in the meantime, he explained.

Paik Jin-hui, vice director of the emergency medical center of Inha University Hospital, said hospitals were struggling from shortage of staff and resources.

“We are only one month into the outbreak, and hospitals are already running out of space to accommodate all patients with respiratory symptoms or fever, who need to be separated from other patients.”

This has led to setbacks in responding to other critically ill patients.

“Doctors in the field report concerns that patients with other illnesses may be neglected as medical resources are concentrated on tackling the epidemic,” he said.

“Four emergency centers have shut down in Daegu. Patients are forced to travel far in search of hospitals, in the course of which they risk passing on the virus to others, and are denied immediate medical assistance that they may need.”

Song Joon-young, an infectious disease specialist at Korea University Hospital in Guro, southwestern Seoul, said that if patients outnumber beds at medical institutions across the country, those with milder symptoms may have to resort to home isolation.

“This is why nonmedical interventions such as hand-washing and wearing face masks are crucial,” he said. “If our health care system goes over capacity and collapses, there won’t be much that can be done.”

“The kind of crisis we are facing cannot afford individual behaviors that deviate from the recommended line of action,” said Ki Moran, directing the Korean Society of Preventive Medicine’s committee for emergency response.

Ki said anyone with flu-like symptoms should refrain from going outside, especially those 65 or above and patients with preexisting conditions.

She said the medical societies have asked the government to allow students not to attend school and workers to take leave of absence if they appear to have symptoms, however light.

“We are looking at only the beginning of a nationwide spread. But these are some of the things we can do to lower our risks,” Kim said, stressing that personal precautions are more effective than what the government can do at this point.

“You may not realize if you’re infected -- let alone tell if someone else is -- in early stages when symptoms are not obvious, which is also when the disease is most infectious,” he said. “In short, hygiene and minimized outside contact are key.”