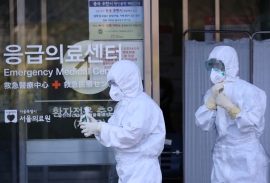 South Korea reported 31 new cases of the new coronavirus Thursday, bringing the total number of infections here to 82, with most new cases centered on the southeastern city of Daegu.

This week's surge in the number of infected people, increasing the nation's total infections by more than 50, came as the health authorities declared that the virus has begun spreading locally.

Vice Health and Welfare Minister Kim Kang-lip told reporters that, "At this stage, (the government) judged that COVID-19 is spreading locally with a limited scope."

The government has been adjusting its quarantine and prevention work to cope with local transmission, Kim said.

The health authorities will deploy 24 more doctors to Daegu and expand the number of virus-detection centers to 22 in the city, Kim said.  Still, the authorities kept the virus alert level at "yellow," the third-highest, Kim said.

Of the 31 new cases, 30 are in Daegu, 300 kilometers southeast of Seoul, and neighboring North Gyeongsang Province. The remaining one was reported in Seoul, the Korea Center for Disease Control and Prevention (KCDC) said in a statement.

Daegu and North Gyeongsang Province are home to some 5 million people.

Of the 30 new cases in Daegu, 23 patients are believed to be linked to a 61-year-old South Korean woman who was confirmed to be infected Tuesday, the KCDC said.

The country's 31st virus patient is presumed to have infected about 40 people so far as she attended church services in Daegu before testing positive for the virus.

An epidemiological survey is under way to determine whether or not the 31st patient is linked to two confirmed cases at a hospital in Cheongdo, south of Daegu, the KCDC said, adding the patient visited Cheongdo earlier this month.

KCDC Director Jung Eun-kyeong called for people who visited the Daegu church and the Daenam Hospital in Cheongdo to stay indoors or report to health authorities if they show symptoms.

The number of coronavirus patients who are receiving oxygen therapy increased to four from one Thursday, Jung told reporters.

Most new cases have no clear ties to travel to China, where the virus originated, or Southeast Asian countries, the KCDC said.

The country's probable coronavirus "super spreader" was hospitalized at a Daegu hospital from Feb. 7 to Monday. The KCDC said that the patient has had contact with 166 people, who have now placed themselves into self-quarantine.

The Shincheonji Church of Jesus in Daegu, where the 31st patient attended worship services, said in a statement that it had been shut down after about 10 members tested positive for the virus.

The KCDC said 1,001 members of the church are asked to self-isolate to contain the spread of the virus.

The public health authorities said earlier it is still unclear how the 31st patient contracted the virus as she had not made contact with other confirmed patients or been abroad recently.

The number of people being checked for the virus and under quarantine came to 1,633 as of early Thursday, up from 1,030 earlier in the day, the KCDC said. South Korea has screened 12,161 people for COVID-19 since Jan. 3, with 10,446 testing negative and 16 patients having been discharged from quarantine after making full recoveries.

South Korea also started to check those who show suspicious symptoms for the novel coronavirus as it grapples with new infections without links to existing cases or overseas travel.

The measure broadens screening for more people and make it easier to detect and isolate COVID-19 cases, the KCDC said.

Under the latest revision, front-line doctors will be allowed to actively conduct coronavirus tests if they think a person may have contracted the sickness.

South Korea has a capacity to conduct 5,000 coronavirus tests a day, but the figure will be increased to 10,000 by the end of the month.

In addition, the country plans to check those who are suffering from pneumonia due to unknown causes. (Yonhap)