Monsta X starts US promotion of new all-English album, 'All About Luv' 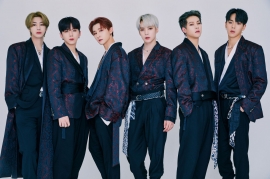 Monsta X met with fans in Los Angeles at its pop-up store, AAL POP_UP Experience, at Tower Records on Friday to promote its first English-language album in the US, “All About Luv.”

The album has received much acclaim since its release Friday, featuring in Time magazine’s “5 Best Songs of the Week,” along with Billie Eilish. Upon its release, the album took the top spot on the iTunes album charts of 17 countries.

Several well-known artists, including Pitbull, French Montana, Steve Aoki and Will.I.Am, collaborated on the 11-track album. “Who Do U Love?” featuring French Montana was released last June and has over 23 million views on YouTube. The album also includes songs in which ex-member Wonho, who left Monsta X last year, participated.

Five of the six members were present at the Los Angeles event, with member Joohoney having announced a break from activities due to mental health issues in January. The bandmates said Joohoney was in good condition and would join them on their North America tour from June 2 to July 11.

Monsta X is scheduled to appear on “The Today Show” and “The Kelly Clarkson Show” on Thursday and Friday, respectively, to promote its new album. AAL POP_UP Experience will open in Live Nation in New York City from Thursday to Saturday.

Monsta X was the first K-pop group to play at Life is Beautiful in Las Vegas and iHeartRadio Music Festival last year.