Concerts for all daughters of the world 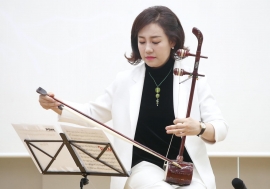 Kang Eun-il’s upcoming concerts seek to remind all daughters that they are precious.

The artistic director of Seoul Donwhamun Traditional Theater is a renowned player of haegeum, a traditional Korean two-string instrument. She is also recognized for her crossover music featuring haegeum.

On Saturday and Sunday, Kang will present five new original works in concerts titled “Ancient Futures: Stories of My Mother, Grandmother and Great Grandmother” at Arko Arts Theater in Seoul.

“I feel that my daughter has not loved herself since her adolescence, citing the imperfectness of her looks, intelligence and everything. I want to tell her that she is a precious being no matter what,” Kang said at a press conference held Wednesday.

“But my daughter, of course, never listens to me, so I thought I should tell her through music. I want to tell not just my daughter but all daughters how valuable and beautiful they are,” the artist in her 50s said.

All five songs in the program are original works commissioned for the performance. They were written by male composers based overseas, as Kang wanted to present “new perspectives” to the female narrative.

Woody Pak was one of the participating composers. A Korean-American, Pak wrote the song “4 Generations,” depicting the lives of his mother and grandmother, Korean immigrants in the US.

“Kang asked me to think about my grandmother, mother and my own generation as an immigrant. Also, she was really inspired by electronic dance music. She said, ‘Can you make something about these women with the EDM kind of feel?’” Pak said.

Donald Womack, based in Hawaii, was inspired by the similarities between Hawaii and Jeju Island. According to ancient myths, the islands were created by goddesses. In “Islands Rising,” Womak mixes elements of folk songs of the islands, depicting women as creators, those who conceive.

Moise Bertran, originally from Catalonia, an autonomous community in Spain, wanted to talk about how women rose to power through wars in his composition “Imagined Recollections.”

Another work in the program was written by Han Jin-gu, Kang’s son. He wrote about how he would feel when his mother passes away. Han said he would likely be full of anger because he is a bad son.

The project is part of the 2019 Arko Selection funded by the Art Council Korea.