The first group of 366 South Koreans evacuated from Wuhan, China, has been released after two weeks of quarantine with all testing negative for the novel coronavirus, the public health agency said Saturday.

The evacuees arrived in the country on Jan. 31, the Korea Centers for Disease Control and Prevention (KCDC) said. They were airlifted out of the central Chinese city that is thought to be the epicenter of the viral outbreak on a special chartered flight. 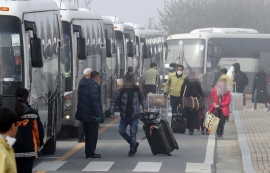 Korean evacuees from Wuhan have been released after two weeks of quarantine in Jincheon. (Yonhap)

Since the first case of the virus was reported in the country on Jan. 21, Seoul confirmed 28 cases, with seven people who were infected being released from hospitals after making full recoveries. Others being treated are also in stable condition with none being seriously ill.

Of the total, 193 evacuees had been kept in isolation in Asan, 90 kilometers south of Seoul, and 173 stayed in Jincheon, 91 kilometers southeast of the capital. All were discouraged from meeting others in the facilities for fear of person-to-person transmission with no outside visitors allowed.

The KCDC said that they had been carefully monitored by medical personnel around the clock with the final tests carried out on all evacuees turning up negative for the COVID-19 virus.

Of the 701 people airlifted in the first two flights, only two were infected, with none of the 147 people brought back this week on the third chartered flight testing positive for the illness so far.

The KCDC said that as a precautionary measure, all evacuees have been told to carefully check themselves for signs of illness and report any developments to medical authorities. They are to be issued a medical certificate saying they have been checked for the virus and will be contacted 2-3 times per day to see how they are getting along after being released from quarantine. (Yonhap)