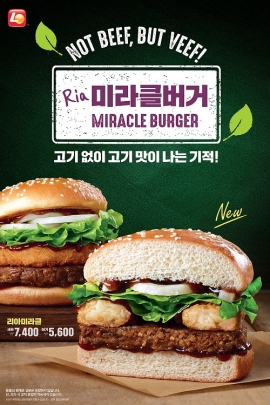 According to the burger chain, the new burger, introduced under the slogan “Not beef, but veef,” features a plant-based patty with a meat-like texture that comes from a combination of proteins from wheat and beans.

The company said it used soybeans instead of eggs for the taste of the Korean-style barbecue rib sauce, and added onions. For the bun, the company used plant-based ingredients instead of milk.

To celebrate the release of the new burger, the company said it was offering a 34 percent discount for the set (4,900 won) for customers who order through its food app, “Lotte Eatz.”

“We sought to reflect the market trend, in which more people are showing an interest in ethical consumption. We will continue to expand the market, so that customers who care about the environment and their health can enjoy various types of veggie burgers,” a Lotteria official said.