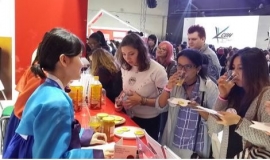 The Korea Agro-Fisheries & Food Trade Corp. operates a promotion booth for Korean food in Paris. This year’s K-food Fair in the city is slated for September. (Agriculture Ministry)

SEJONG -- South Korea’s food producers are pinning high hopes on the overseas K-food Fair events this year on the back of the growing popularity of local dishes thanks to TV programs and movies.

Over the past few years, the annual exhibition has provided local producers -- mostly food processing firms -- with wider opportunities to tap overseas markets, including in Asia, America and Europe.

Small and medium-sized enterprises mostly participate in the events, organized by the Ministry of Agriculture, Food and Rural Affairs and the state-funded Korea Agro-Fisheries & Food Trade Corp.

This year, the fair will be held in eight big cities with the participation of 252 companies in total -- around 20 to 50 local companies in each location -- between May and November, according to the Agriculture Ministry.

The first of the eight events will kick off in Moscow from May 23-25. Russians have expressed great interest in Korean cup ramen (instant noodles).

The next destination of the K-food Fair slated for June 13-16 is New York, targeting buyers from the US, Canada and Mexico as well as ordinary consumers. Business-to-business and business-to-consumer events will be held at a hotel and convention center, respectively, in Manhattan. 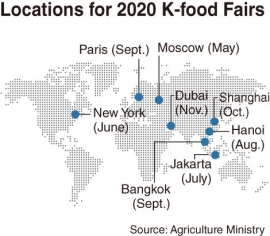 Jakarta will mark the third venue of the event, scheduled for July 9-12, amid Korean policymakers’ effort to make inroads into the largest market. Indonesia has the world’s fourth-largest population and ranks 14th in terms of area.

While the fourth is scheduled for Vietnam’s Hanoi this August, dates and exhibition places are yet to be confirmed. Park Hang-seo, a Korean soccer hero and the head coach of the Vietnamese national soccer team, has been the honorary ambassador for Korean farm products since 2018.

Paris is the venue for the fifth event from Sept. 10-12, followed by Bangkok from Sept. 24-27. Both of them will target B2B deals for export contracts and B2C for public promotion.

“Europe was regarded as an unexplored market for Korean farmers,” a ministry official said. “But awareness of Korean cuisine has risen rapidly over the past few years on the back of participation by domestic exporters in international food fairs.”

Among traditionally popular items in the past fairs were ginseng, gim (dried laver), makgeolli (alcoholic drink from fermented rice), kimchijeon (kimchi pancake) and tteokbokki (stir-fried rice cake), according to organizers.

Shanghai and Dubai will mark the next two locations for this year’s food fair tour, which are slated for Oct. 21-25 and Nov. 3-4, respectively.

According to the ministry, the eight fairs will offer demonstrations, consultations and networking opportunities. And companies will be matched based on their needs, creating opportunities for future business.

Meanwhile, the government has the daunting task of reducing the trade deficit in agricultural products involving fresh food.

Last year, the Trade Ministry asked other ministries, including the Agriculture Ministry, to map out measures to reinvigorate the nation’s exports amid the lackluster performance.

When it comes to farm product exports, Korea has faced hurdles such as protectionism by advanced countries despite bilateral trade pacts.

The National Assembly Research Service issued a warning about the trade deficit in the farming industry in a report.

“There is a need to protect the local market to prevent the trade balance in the agriculture-livestock segment from worsening further,” it said. “(The government) should provide support for industries that have suffered losses.”

It also cited the steady trade deficit with the US in the area of farm products. Noting that the deficit started in 2011, it said livestock product imports from the world’s largest economy has grown sharply.