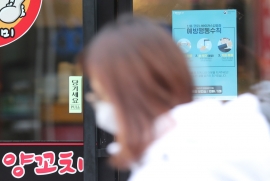 A masked pedestrian passes by a lamb skewer restaurant in Seoul. (Yonhap)

Health authorities insist the transmission of the novel coronavirus through food is unlikely, but fears concerning Chinese food and imported ingredients are spreading fast, and hitting the industry hard.

Almost a month has passed since the first novel coronavirus patient was confirmed in Korea, and Chinese restaurant owners are struggling to make ends meet, as rumors backed by anxiety are quickly circulating that the epidemic could be spread via food.

“I suggested having skewered meat for lunch, but my colleagues all rejected the idea, saying the ingredients are all imported from China,” Kim Irang, a 28-year-old office worker in Seoul, told The Korea Herald.

According to the Korea Centers for Disease Control and Prevention, it is unlikely for the virus to be transmitted from food, as it cannot grow there, but needs a host -- either an animal or a human to survive.

“Before (the outbreak of the novel coronavirus), people would wait in lines, especially on days around the end of the week. Now, there is almost no customer visiting … it is not even 90 percent decrease (of customers),” the owner of a Chinese hot pot restaurant in central Seoul told The Korea Herald on Wednesday.

The restaurant had only two groups visiting for lunch on the day. On the wall, the owner had put up handwritten notices, one in Korean and one in Chinese.

In Korean, “In concern for the coronavirus, we regularly fumigate the restaurant. The Chinese part-timer has been staying in Korea for over six months.” In Chinese, “Wishing the China epidemic ends soon. Wishing everyone is safe and healthy. Hang in there!”

“On situations like this, where can people like us make a complaint? It is worse than the IMF crisis for us,” added the owner surnamed Kim, referring to the financial crisis the country experienced in the late 1990s.

Kim’s lament appears to be shared by many other Chinese restaurants that have sprung up here in the past few years as the Chinese tongue-numbing mala sauce has attracted the appetites of Koreans fond of the spiciness.

“Since the Lunar New Year holiday, we did see people being more hesitant to visit my restaurant. I think we get about a quarter less customers than before the outbreak of coronavirus,” a Malatang restaurant owner in Hongdae, a bustling college district in Seoul, told The Korea Herald. 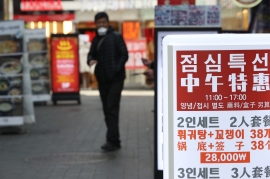 A person wearing a face mask looks at a menu on an empty street in Myeongdong. The popular shopping district in Seoul has been deserted in the wake of novel coronavirus outbreak. (Yonhap) 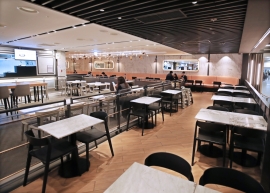 The food court at Incheon International Airport Terminal 1 is empty at lunch time as the number of travelers have dropped in the recent days after the outbreak of novel coronavirus. (Yonhap)

People also have appeared reluctant to buy products made in, or with ingredients imported from, China.

Lee Min-jeong -- not her real name -- has avoided buying or consuming products imported from China.

“I feel uneasy about buying or consuming items that are from China, like soy milk products that say its soybeans are from China,” Lee, an office worker in Seoul, told The Korea Herald. “I like devil’s tongue jelly and Chinese glass noodles, but I do not buy them anymore (since the virus outbreak).”

As the outbreak shows no sign of abating, fish markets and restaurants selling raw fish are also struggling, as the coronavirus is commonly thought to be passed on from live animals.

“It takes a long time for imported food items, such as China-made kimchi to arrive, and I believe that, even if the virus has been on the product, the survival rate is very low,” commented Jung Eun-Kyeong, director of the KCDC.

“The possibility of getting infected from (the imported goods), would be much lower.”