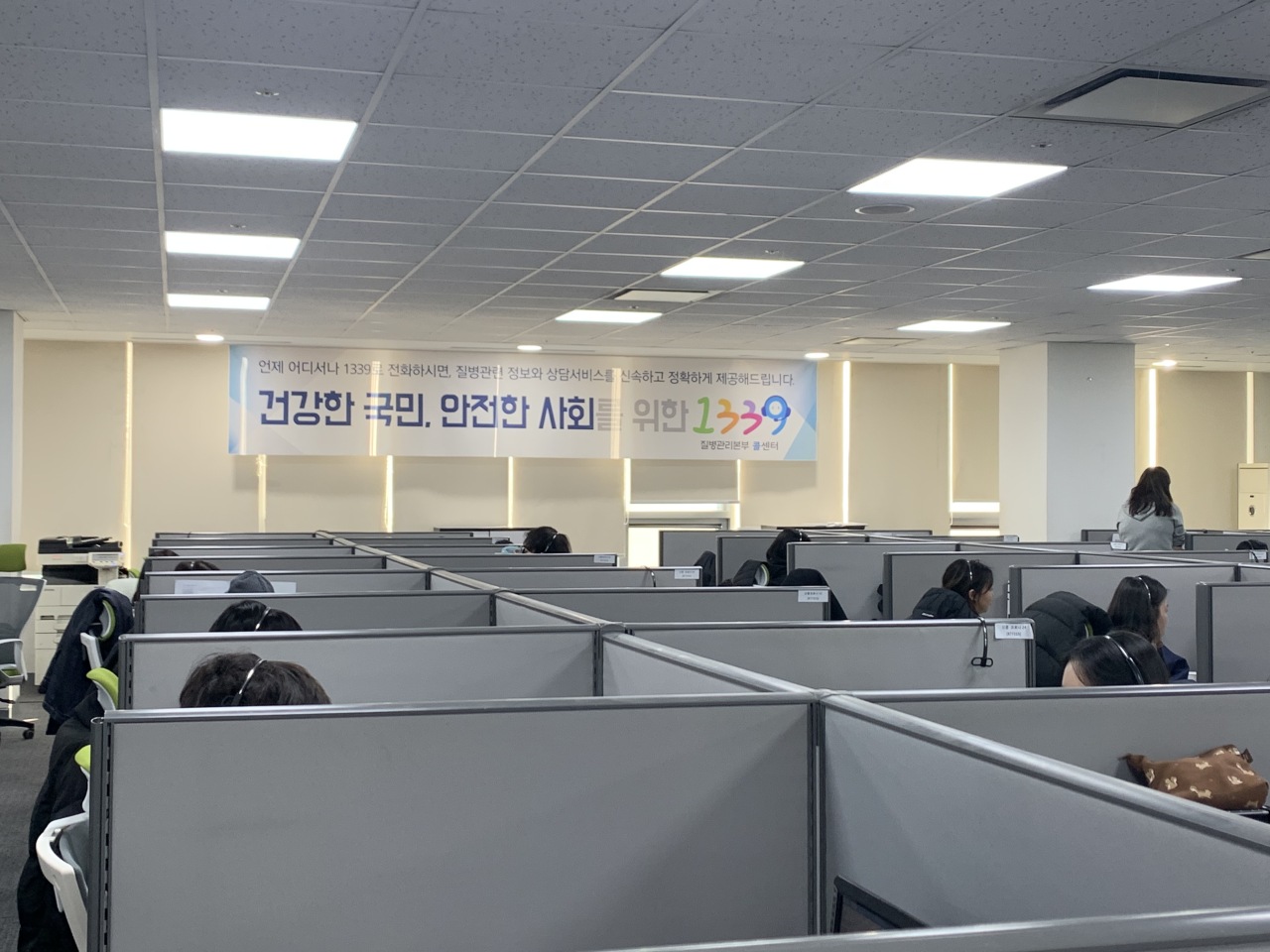 Inside of the KCDC hotline office (Kim Arin/The Korea Herald)
Anyone suspected of being infected with the new coronavirus is first and foremost directed to call the disease control centers hotline at 1339. It is the primary point of contact for all virus queries, guiding the public on how to stay safe amid the health crisis.

The 24/7 call service has been operating under emergency procedures since the onset of the outbreak in end-January.

Prior to the virus, the Korea Centers for Disease Control and Prevention hotline center took about 300 to 400 calls per day on average. The number has now soared to nearly 20,000 during peak periods.

Earlier this month, the KCDC added 152 call center agents, bringing the total to 188. Two epidemiological investigators from the disease control centers headquarters have been dispatched to the call center office in Yeongdeungpo, a southwestern district in Seoul, to train agents on response guidelines and help with in-depth inquiries.

“With augmented staff, the response rate now hovers above 92 percent,” Park Hye-mi, the call center’s director, told The Korea Herald. She has helmed the contact headquarters since the aftermath of the Middle East respiratory syndrome outbreak in 2016.

She said about 20 to 30 calls a day are from foreigners, who mostly prefer English or Chinese.

The Korea Tourism Organization and Immigration Service hotlines -- 1330 and 1345 -- are working in conjunction with the centers to offer round-the-clock interpretation services for non-Korean speakers. Those who do not speak Korean and wish to contact the KCDC can get on a three-way call with interpreters at the two agencies by calling 1339 and then pressing 4.

Kang Jang-hoon, a veteran call agent who has worked at the hotline service since June 2015 at the height of the MERS epidemic, said a vast majority of calls were from people with symptoms of respiratory illness or fever.

For those without China travel history, the service did not advise them to be checked for the virus, he said.

Some sought counsel on day-to-day decisions such as whether it was safe to travel to a certain country or to meet someone who had recently been in China.

Quelling the anxiety of citizens who are not likely to be infected was also part of the job, Kang said.

“Not a lot of the calls are actually referred to state health authorities as suspected virus cases,” he said. “We also assist callers on non-coronavirus-related questions such as those regarding tuberculosis, influenza, or vaccine schedule.”

According to Kang, each call lasts for about three minutes, longer for visitors from China.

Asked about the hardest part of his job, Kang replied it was having to deal with prank calls or false reports. But he said most callers were relieved and grateful at the end of a call.

KCDC official Lee Yoon-jae said aside from taking calls, the hotline agents have to catch up with daily updates on the virus situation.

“There is a constant stream of new information that agents are required to learn,” he said. “For instance, the amount of government compensation for isolated individuals, list of countries on travel alerts, and so on.”

During a visit to the call center on Feb. 1, Prime Minister Chung Sye-kyun asked the service to build up expertise through regular training and communications with disease control and health authorities.

“A prompt response will lead to early detection of infection cases, in turn helping to control the spread of virus,” he said.