[ The Korea Herald – Send E-mail ]
[Newsmaker] Coronavirus-positive Chinese tourist stirs up fear in Jeju
By Park Han-na
Published : Feb 3, 2020 - 16:45
Updated : Feb 3, 2020 - 18:29
The southern resort island of Jeju is struggling to track down those who came into contact with a Chinese tourist who tested positive for a deadly coronavirus after returning from a trip there.

As fears mounted, health authorities said Monday that the Wuhan resident was unlikely to have had symptoms while traveling around the island for five days last month. 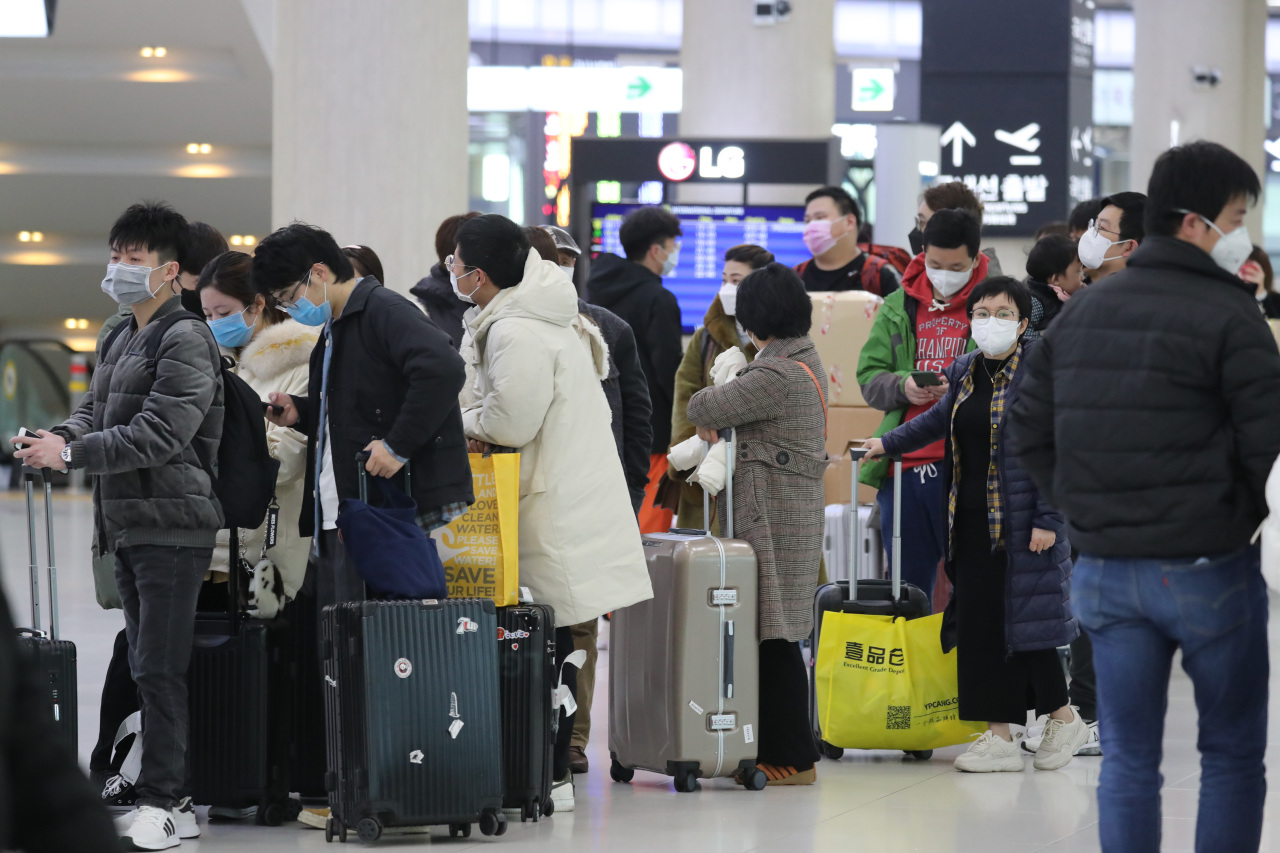 Passengers wait for a flight to Shanghai at Jeju International Airport on Monday. (Yonhap)

“The Chinese health authorities informed us that the patient was quarantined after showing symptoms like a fever on Jan. 26 after returning home and was confirmed on Jan. 30,” Korea Centers for Disease Control and Prevention chief Jung Eun-kyeong said during a press briefing.

She reconfirmed an announcement by the Jeju provincial government, which initially said she had no symptoms during her stay and experienced a fever following her arrival to Yangzhou in China’s eastern Jiangsu province on Jan. 26.

There had been concerns about the Chinese woman’s visit to Jeju after the provincial government found out that she had bought an antipyretic at a pharmacy in Jeju on Jan. 24.

Later, officials at the provincial government said she bought the medicine apparently for someone else, based on findings from a meeting between an epidemiological investigator and a pharmacist at the drugstore in question as well as surveillance camera footage.

The 52-year-old woman was diagnosed with the novel coronavirus on Thursday in China after her five-day trip to the island with her daughter. She arrived at Jeju Airport via Spring Airlines on Jan. 24.

“The most important thing is the pharmacist’s testimony, but the pharmacist said that the Chinese woman did not cough or sneeze severely,” Bae Jong-myon, director of the Jeju Center for Infection Diseases Control and Prevention, told reporters during a press briefing.

The patient’s daughter, who tested negative for the coronavirus, said her mother had bought the medicine for someone else.

Arriving at the island under a visa-waiver program, the woman visited landmarks and tourist attractions, such as Seongsan Sunrise Peak and Udo, and shopped at two duty-free stores.

Based on the woman’s activities, captured by surveillance camera footage, officials at the provincial government are keeping nine people who had close contact with the patient isolated at their homes, including five employees of the hotel where the woman stayed, a bus driver and two employees of a convenience store.

Meanwhile, 15 people who showed symptoms of the coronavirus on Jeju Island have tested negative.

On Sunday, Prime Minister Chung Sye-kyun said the visa-free program for foreign travelers to Jeju will be temporarily suspended, marking the first halt since its launch in 2002. Some 797,300 Chinese nationals visited the island without visas last year, accounting for 98 percent of all tourists whose visas were waived.