The center has been publishing the Korean Musicology Series since 2007, aiming to promote understanding about traditional Korean arts, encouraging its globalization and international exchanges. 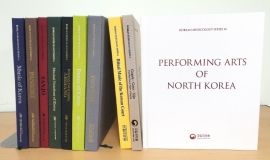 A total of 10 English-language books have been released, one each on pansori (traditional narrative singing), sanjo (instrumental music) and Korea’s traditional folk song “Arirang,” as well as on other subjects related to traditional Korean art.

The book consists of six chapters, written by professors and experts of North Korean art who are based in South Korea. Kim Hee-sun, the director of the division of music research at the National Gugak Center, and Keith Howard participated as editors.

Keith Howard is a professor emeritus at the School of Oriental and African Studies, University of London, and has been studying traditional Korean art since 1981. He has written and edited numerous publications about traditional Korean art, including, “Songs for ‘Great Leaders’: Ideology and Creativity in North Korean Music and Dance.”

“Study about North Korean art is part of the journey to recover the homogeneity of culture of the two Koreas, being an attempt to provide an overall understanding of art in Korean Peninsula. I hope in the near future, we can write history about new Korean art through co-studies and academic exchanges between the two Koreas,” said Lim Jae-won, the center’s chief.

“Also, I hope that this book can be of help to scholars around the world who are to start studies on North Korea’s performing arts, contributing to the continuance of peace between North and South Korea.”

The publication will be distributed to overseas universities and institutions. It is currently available in PDF form at the center’s website: www.gugak.go.kr.