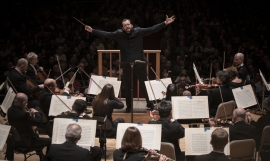 With the death toll of China’s coronavirus outbreak rapidly increasing, the Boston Symphony Orchestra has called off its East Asia tour, including its first-ever performance in Seoul.

The orchestra announced the cancellation of its tour led by music director Andris Nelsons in an official statement released Thursday. The tour was originally set to start off with two shows in Seoul on Feb. 6 and 7, followed by performances in Taipei, Hong Kong and Shanghai stretched out to Feb. 16.

“On behalf of everyone at the Boston Symphony Orchestra, we are all deeply disappointed that we will not be able to perform for the wonderful audiences in Seoul, Taipei, Hong Kong, and Shanghai,” said BSO President and CEO Mark Volpe.

"It has become clear through recent official reports that concerns over the spread of the new coronavirus have dramatically increased, forcing the orchestra to look seriously at the feasibility of proceeding with the tour,” Volpe added.

According to Volpe, the Shanghai presenters decided to cancel their upcoming performances, assumedly following the worsening situation in China, where the highly contagious virus first broke out.

Official numbers showed that the death toll in China surpassed 210 as of early Friday and around 9,800 confirmed cases of the virus have been reported worldwide, according to the Chinese government and the World Health Organization.

Although Seoul, Taipei and Hong Kong are much less impacted by the virus than mainland China, the orchestra is calling off the entire tour out of safety concerns, Volpe said.

This year’s trip was to be orchestra’s 29th international tour since its founding in 1881, and also the first ever visit to South Korea. In 1960, the prestigious orchestra canceled a scheduled appearance in Seoul due to political unrest resulting from the 4.19 civil revolution.

According to the local organizers of the event, around 2,000 seats had been reserved for the two-day concert.

The company vowed a full refund of the tickets and recommended ticket holders to wait for officials from the organizer to call them as individual cancellation may incur unnecessary fees.